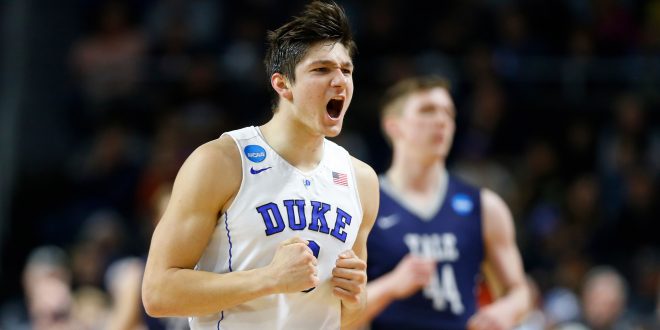 Mar 19, 2016; Providence, RI, USA; Duke Blue Devils guard Grayson Allen (3) reacts after scoring against the Yale Bulldogs during the first half of a second round game of the 2016 NCAA Tournament at Dunkin Donuts Center. Mandatory Credit: Winslow Townson-USA TODAY Sports

Days are getting shorter and the college basketball season is coming closer and closer. The Associated Press released their preseason men’s Division I basketball poll Monday and at the top there are not many surprises with the top of the chart including notable basketball powerhouses.

Grayson Allen , a junior out of Jacksonville, Fla.  led the team in points last season with an average of 21.6 points per game. Allen returns this year for the Blue Devils

Mike Krzyzewski’s squad has a total of three starters returning and it’s the eighth time that the Blue Devils have held the preseason No.1 ranking—tied with UCLA.

The Blue Devils received 58 first place votes as the No. 1. This season seems to be the year of the freshmen for several teams, Duke included.

Duke added four players that were ranked within the top 20 in the nation for recruiting with Harry Giles (No.1), Jayson Tatum (No.3), Frank Jackson (No.10), and Marques Bolden (No.16).

In the SEC there is only one team that represents the conference in the top 25 despite three teams making the Big Dance last season (Kentucky, Texas A&M, and Vanderbilt where Vandy was eliminated as one of the first four).

The Kentucky Wildcats sit second in the AP Poll and they have another stellar freshmen class. Big Blue Nation had three of the youngsters starting in the exhibition game. UK signed four freshmen all within the top 15 in the country according to the ESPN 100. Freshmen De’Aaron Fox (No.6), Bam Adebayo (No.5), and Wenyen Gabriel (No.14) started along with senior Derek Willis and sophomore Isiah Briscoe. The Wildcats won the SEC Championship last season and made the tournament, but fell to Indiana in the second round.

Lose 76 percent of your scoring from a season ago; start the season at No. 2 in the @AP_Top25. That's how we roll here. pic.twitter.com/JkkhT7c0wd

The Rest of the Best

A team that you may ask why they are on the list, is UCLA. The Bruins are the only team in the rankings with a losing record—15-17 last season. UCLA, is another school with a top recruiting class. They return four of their five starters and three of the top freshmen in the country. The Pac-12 has representation in the rankings with UCLA at No.16, Oregon at No.5, and Arizona sitting in tenth.

The Atlantic Coast Conference and Big Ten are tied with the most teams in the poll with five teams representing their conferences.

Thanks for the memories, Vine. https://t.co/8Q28J6mXcE

Rounding out the rest of the top 25 teams are Texas, Creighton, Rhode Island, Iowa State, and Maryland.

The first regular season poll will be on Monday Nov.14