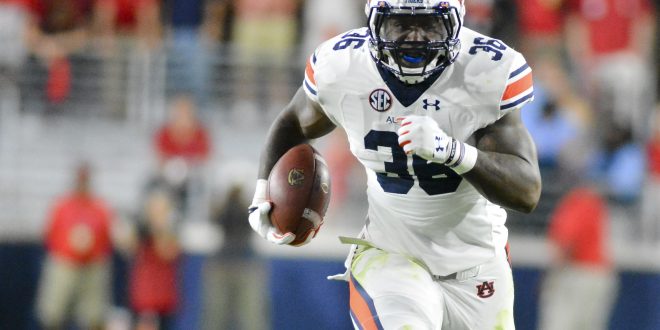 The Vanderbilt Commodores will take a trip to Auburn, Alabama to take on the No. 11 ranked Auburn Tigers.

The 4-4 (1-3 in the SEC) Commodores will take the tall task of putting a stop to Auburn’s success. Vanderbilt Commodores Head Coach Derek Mason says they are going to have to beat Auburn because the Tigers don’t beat themselves.

The Tigers are coming off a 40-29 win against Ole Miss and have a five-game winning streak. They look to keep rolling, especially at home.

The Commodores got a home victory when they beat Tennessee State 35-17.

Auburn running back Kamryn Pettway will be a key factor in this game. Pettway leads the Tigers with 148 carries and 933 rushing yards, and has seven touchdowns.

The running back position was a mystery at the beginning of the season. Auburn Tigers head coach Gus Malzahn said he knew Pettway had a chance to be really good.

Pettway’s strength and size has caught the attention of Mason. Auburn’s running game took pressure off quarterback Sean White, who was 15-for-22 and threw for 247 yards.

Is it Saturday yet? #AnchorDown pic.twitter.com/Mw2MLbOwst

The Commodores will have to look for an answer to Auburn’s rushing attack on defense. One solution will be Vanderbilt Linebacker Zack Cunningham. Malzahn says Cunningham has a motor and is fun to watch on film. Cunningham is returning to his home state of Alabama and Mason believes he’ll rise to the occasion.

Vandy has a rushing attack of their own in Ralph Webb, a Gainesville native. Webb leads the Commodores in rushing and is on pace for 1,000 yards. He will have to run through Auburn’s stingy defense.

Auburn has allowed more than 14 points once in the last five games and 233 rushing yards in the last three games. Mason says Auburn’s front seven is not only stingy, but deep as well.

If Vanderbilt puts up points like they did against Tennessee State and Western Kentucky earlier this season, then they may be able to put themselves in position for an upset.

Kickoff for this game is at noon and can be seen on ESPN.