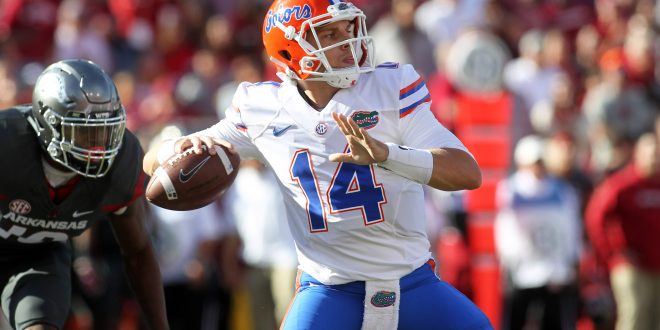 Florida Could Start A New QB on Saturday

Jim McElwain has come a long way from the days he believed he could win with his dog Claire-a-bell in the quarterback position.

Following up a huge win over Georgia and receiving the program’s highest ranking since before the end of last season with an embarrassing 31-10 road loss to Arkansas, McElwain admitted hindsight is 20/20. QB Luke Del Rio is now listed on the Gators’ injury list after hurting his shoulder against Arkansas. McElwain announced in a press conference on Monday that looking back, a change should have been made on Saturday.

Del Rio completed just over 50 percent of his passes against the Razorbacks. He went 19-for-37 passes for 229 yards, two interceptions and no touchdowns on Saturday.

In Del Rio’s absence, Purdue graduate transfer Austin Appleby will begin the week taking first snaps at practice. But McElwain isn’t ruling out the options of playing freshmen QBs Kyle Trask and Feleipe Franks. With questions swarming around the likelihood of starting a freshman QB was has the potential to redshirt, McElwain said he has played a freshman this late in the year before back when he was at Montana state. He referred to Rob Compson, and the main difference here was Compson had already red-shirted when he made his college debut.

Appleby has started in two games this season following Del Rio’s injury against North Texas. In those starts, the Gators fell to Tennessee 32-28 and scraped by against Vanderbilt 13-6. Appleby completed 42 of 67 passes for 440 yards, three touchdowns and one interception. Senior wide receiver Ahmad Fulwood commends Appleby’s ability to command the field.

Both Trask and Franks have yet to play this season. Kick-off against South Carolina is set for noon in the Swamp.