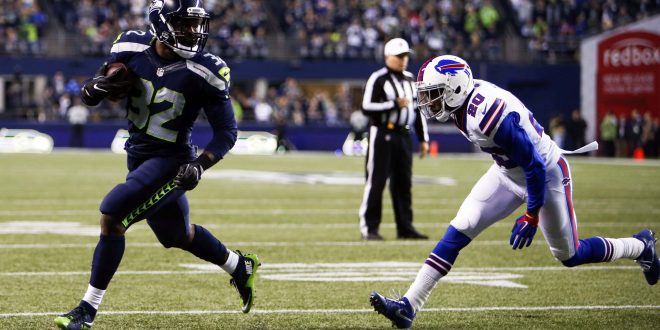 Wilson Returns to Form as Seahawks Take Down Bills

It’s been a season to forget for Seattle QB Russell Wilson; Wilson’s season has been marred with injuries, putting the mobile quarterback out of his comfort zone. On Monday night though, Wilson looked like his old self, scrambling and extending plays with his legs to keep the Seahawks offense moving against a tough Bills defense.

Despite Wilson’s performance, it was Buffalo who got out to the quick start. After Seattle went three and out on the first drive of the game, Bills linebacker Jerry Hughes blocked the punt setting up Buffalo on the Seahawks’ three-yard line. QB Tyrod Taylor scored immediately on a read option to put Buffalo on top 7-0. It didn’t take Seattle long to answer back; Wilson drove his team right down the field and scored on a quarterback keeper of his own to knot things up at seven a piece. Wilson says he felt good out there and back to full speed after being banged up last couple weeks.

Unreal. @TheJimmyGraham is simply on another level tonight. #GoHawks https://t.co/MnzNHnKQ8s

This was Graham’s first multi-touchdown game since the 2014 season when he was a member of the New Orleans Saints. Graham also now has three 1oo-yard receiving games this season; last season he had just one such game.

For the Bills, this was their third straight loss. It drops them below .500 on the season. It wasn’t the quarterback play of Tyrod Taylor though that brought them down, though. Taylor had arguably the best game of his career throwing for 289 yards and one score while adding 43 yards on the ground with a score. Taylor consistently extended plays and found open receivers. Robert Woods was Taylor’s favorite target all night; Woods hauled in a career-high 10 catches for 162 yards.

Taylor put his team in position to tie the game late in the fourth as he drove them down the field in the final two minutes. Seattle’s Cliff Avril halted the drive though on third down, sacking Taylor for a 10-yard loss. On the next play, Earl Thomas broke up a pass in the endzone to seal the win for Seattle giving them their 11th straight Monday Night Football win 31-25. Buffalo head coach Rex Ryan said his team gave it everything they had so it’s unfortunate they came up short.

The buzz around the game though came at the end of the first half. Seattle’s Richard Sherman went to block a field goal and took out the legs of Bills kicker Dan Carpenter. No call for roughing the kicker was called, generating a lot of criticism.

The Bills have a bye week next before taking on the Bengals. Seattle is in primetime again as they take on the New England Patriots for some Sunday night football action.

Im a senior at the University of Florida currently pursuing a degree in Telecommunications. I work for ESPN Gainesville 95.3 and anchor the Monday sports broadcast for WUFT First At Five. Im from New York and an avid sports fan of all New York teams.
Previous Steph Curry Sets NBA Game Record for Three Pointers
Next Florida Could Start A New QB on Saturday