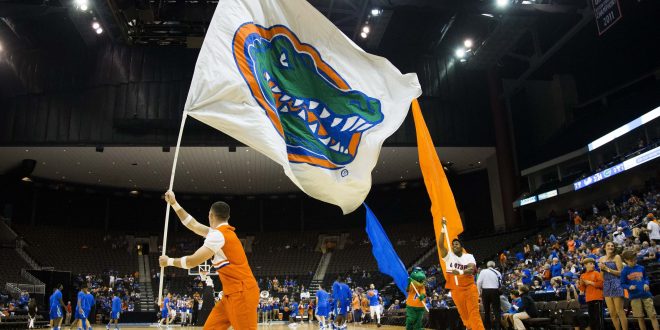 Florida didn’t look great in the first twenty minutes, but a stellar second half propelled the Gators to an 80-59 victory over FGCU on Friday night at Jacksonville Veterans Memorial Arena. UF’s defense was key in their season opener, forcing 19 turnovers, leading to 24 points. The Gators were also able to dominate in the interior, outscoring the Eagles in the paint, 46-26.

Devin Robinson, Canyon Barry and John Egbunu were all key factors against the Eagles. Devin Robinson contributed a team-leading 14 points on 4-of-7 shooting, Canyon Barry added 13 points and six rebounds, while John Egbunu came close to a double-double with 13 points and eight boards. Brandon Goodwin led FGCU in scoring with 14 points on 6-of-12 shooting.

The Gators struggled from three-point land going a poor 4-of-15 (27%) from downtown. Despite a poor performance from beyond the arc, the team went a very solid 20-26 from the free-throw line, a vast improvement from last season.

“Like I said, FGCU is a great team, I think they’ve got a chance to win the league [Atlantic Sun] again, they’ve got a lot of good players, but I was really happy with our team effort,” Canyon Barry said. “I think everyone played well together, obviously it’s the first game, so still a lot of figuring out to do, getting used to each other, but I’m happy, we got the win and that’s all you can ask for.”

Devin Robinson was also pleased with the effort, contributing three steals himself. He talked after the game about how his team was able to get it done on defense.

“Playing hard, being active, just being annoying, basically, running around, pressing, and just playing hard and outworking them,” said Robinson.

Mike White made sure to note the quality of FGCU’s team after the game. The Eagles are the favorite to win the Atlantic Sun this season.

In a stark contrast from last season, the Gators started the game with two straight three-pointers from Devin Robinson.

Florida Gulf Coast went into a full-court press after Florida took an 8-4 lead. The Eagles strategy worked out as they pulled within one point with 13:30 left in the first half.

Canyon Barry scored his first points as a Florida Gator with 12:43 left in the first half on a beautiful floater off of the glass. That shot gave UF a 14-11 lead.

Rayjon Tucker gave FGCU their first lead of the game off of a corner three-pointer with just under 11 minutes left in the first half. A second consecutive make from beyond the arc by Brandon Goodwin would give the Eagles a four-point lead with 10:35 left. Mike White took a timeout shortly afterwards.

John Egbunu gave the Gators the lead with just over six minutes left in the first half on a clean hook shot. FGCU led for four minutes and 24 seconds before Florida re-took their lead.

John Egbunu and Devin Robinson led all Gator scorers in the first half with eight points apiece. Egbunu was Florida’s leading rebounder in the first twenty minutes, corralling six boards. Brandon Goodwin led all first-half scorers with 10 points, going 4-7 from the field and 2-3 from long-range.

Florida’s advantage in the first half came off of points in the paint, where they outscored Florida Gulf Coast, 20-16. The Eagles advantage came from their reserves, as they outscored the Gators in bench points, 17-9.

Florida Gulf Coast’s 6:47 scoring drought would finally end when Demetris Morant hit 1-of-2 free throws to narrow the Gators’ lead to nine with 8:41 left in the game.

The Gators took their biggest lead of the game up to that point on a Chris Chiozza lay-up with just above three minutes left in the game. Florida led 77-58 at that point.

The Gators finished the game on an 18-5 run en route to an 80-59 victory over Florida Gulf Coast. The Gators next contest is on Sunday, when they face the Mercer Bears at 8 p.m.

Previous SEC Preview: Tennessee to Host Wildcats
Next Florida Volleyball: Another Sweep Adds to the Streak