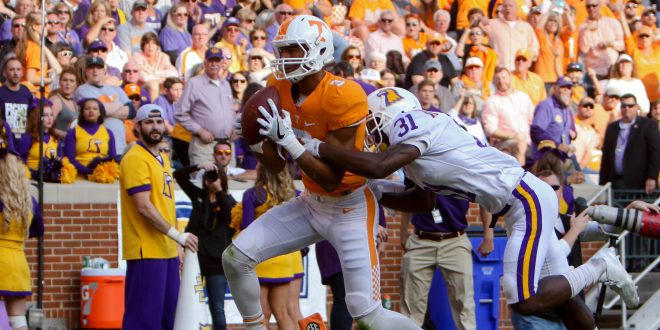 The Tennessee Volunteers were perched in the hot seat for a portion of this 2016 season, with claims of their team falling apart. Think the grass turned brown on their season? If the Vols can take care of the rest of their business however, they can still punch their ticket to Atlanta for the SEC Championship game.

This Saturday, UT (6-3) will try and smooth out their Rocky season starting with Kentucky (5-4). Following the Wildcats, they face Missouri at home, and then Vanderbilt on the road. Winning out would in all likelihood put them on top of the East-leading Florida Gators, whom they devastated 38-28 earlier in the season. Florida faces South Carolina at home who is gaining momentum, and LSU on the road, which could be the nail in the coffin on their season. But even crazier, if Kentucky wins this Saturday at Neyland Stadium, and the Gators indeed drive that rusty nail through their own coffin, the Wildcats would win the East.

Kentucky is your 2016 SEC East champs.

The Volunteers season has been one of either luck or divine skill as they have rallied from behind in a majority of their wins. Hail Marys, touchbacks, and overtime victories have defined their wins and if they continue to play smart they can knock off Kentucky. Senior QB Joshua Dobbs has 1,869 yards with 18 TD’s. Last week added some confidence against Tennessee Tech, after they ran away with a 55-0 victory. This was a breath of air for them after three consecutive losses beforehand.

Dobbs recorded a solid 12 for 13, 183 yards and 3 TD’s. Glorified running back or not, he’s seen some action rushing with 323 yards, 102 rushes, and 5 TD’s. Backup QB Quinten Dormady even got some reps and was 9 for 13 for 109 yards. Junior running back Jalen Hurd tweeted goodbye to the program, but John Kelly had 198 yards and a touchdown with 21 carries since his departure. Game-time decisions will be made on running back Alvin Kamara who was injured against Alabama. He has rushed for 313 yards, 3 TD’s and been an asset with 22 passes caught for 260 yards and 3 TD’s. WR Josh Malone and Jauan Jennings have over 900 yards and 12 TD’s between the two of them to add to the mix.

Receivers Jeff Badet and Garrett Johnson and TE C.J. Conrad have 9 TD’s on the receiving side of things. UK’s offense will have to step up and eliminate turnovers. Their defense isn’t firing and has lost 13 fumbles, and Tennessee will be waiting to pick up points defensively. The Cats will need to be ready for defensive end Derek Barnett, a leader in the SEC with 9 sacks.

Overall, Tennessee is nationally ranked 77th offensively compared to Kentucky who ranks 80th. UT tops them at 54th defensively to UK’s 83rd. Tennessee has won 30 of their last 31 meetings with the Wildcats.

Although an upset is on the table, Rocky Top will most likely be ringing again from Neyland Stadium this Saturday at noon.

September 8, 1990, Steve Spurrier took the field as UF's head coach for the first time, and led the Florida Gators to a win against Oklahoma State. Gator Nation stood up stronger that day, and I apparently took my first steps to stand with them. Since that day, the most memorable moments were defined by sporting events with my family. I was a competitive gymnast, cheerleader, and dancer. After career ending injuries, I decided the next best thing would be to pursue sports journalism. Sports have a way of brining people together from all over the world. I enjoy learning those stories that are universal for so many people.
@KadyMarlowe
Previous Columbia Tigers Take On Lincoln Trojans for First Round of the Playoffs
Next Florida Dominates in the Paint en Route to 80-59 Victory Over FGCU