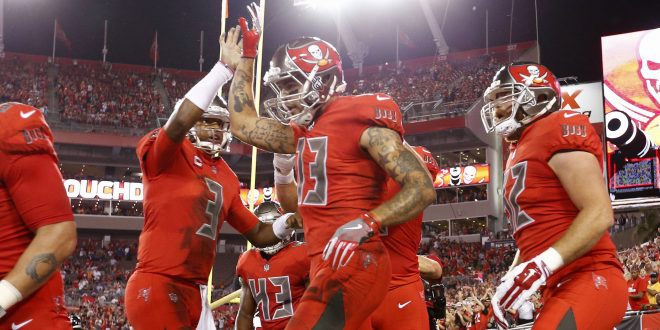 Midway through the 2016 season, the Tampa Bay Buccaneers (3-5) are yet to get a home win. To look at it positively, more than half of their losses are against high-caliber teams. With the exception of the Denver Broncos (6-3), their games were close.

Tampa Bay improved on special teams in Week 9, but that’s it. Their defense dropped three spots, while the offense remains 25th despite scoring 28 points in  Thursday night’s 43-28 loss against the Atlanta Falcons (6-2). The Week 1 31-24 win over Atlanta is the only win for Tampa Bay over a team with a winning record; their other two opponents they won against have a 3-11 combined record.

Despite poor play from the Bucs, they are producing some individual spotlights. Wide receiver Mike Evans has been the go-to receiver. He ranks sixth in touchdowns scored for all players (outside of quarterbacks).

Evans leads the league in times targeted (103) and is also now the franchise record holder for receiving touchdowns through eight games.

Although the Bucs are not playing as well as projected, they can still turn things around. They will be host the bad news Chicago Bears (2-6) in Week 9.

The Bears may not have the best record, but they are confident. They are coming off a win over the NFC North leaders, the Minnesota Vikings (5-3).

The Bucs will be ending their three-game home stand Sunday when they face the Bears. Good news, a win here could spark momentum before their post-season dream become out of reach.

The bad news—they will be facing the Kansas City Chiefs, Seattle Seahawks, San Diego Chargers, Dallas Cowboys and the New Orleans Saints (twice) in the coming weeks. Those teams are a combined 21-14-1.

The odds are not favorable, but games are won, one game at a time. With a duo like Jameis Winston and Mike Evans, the Bucs could flip things around fast.

It's #ElectionDay! Exercise your right to choose… in more ways than one!

Kickoff against the Bears from Raymond James Stadium is set for 1 p.m.