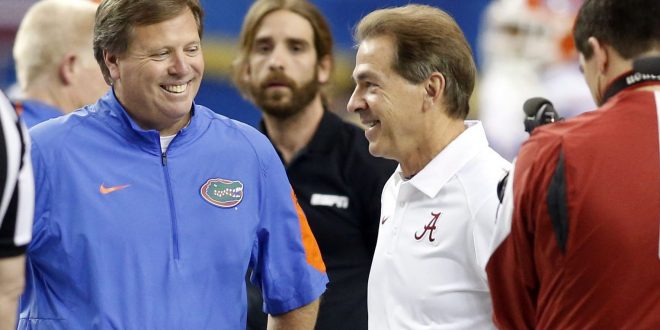 Saban and one of his former proteges in McElwain are certainly no strangers, with McElwain having spent four seasons as the offensive coordinator at Alabama under Saban. While there, Saban and McElwain won two national championships before McElwain became head coach at Colorado State.

In last year’s SEC Championship Game, Saban’s Crimson Tide edged McElwain’s Gators 29-15. There weren’t many apparent cases of Saban out-dueling McElwain in this matchup. McElwain’s Gators were on their backup quarterback and Saban was riding Derrick Henry’s explosive season. McElwain has yet to truly be able to display offensive prowess as the Florida head coach, while Saban’s teams have continued to rule the majority of the college football world.

If there’s anything we know about Nick Saban, it’s his competitive nature. We know precious little else about Saban however, especially if we simply go off of his press conference and interview responses. McElwain seems to have adopted this from Saban, saying very little in his own right.

This competitive nature has also seemingly rubbed off on McElwain, who is no stranger to displaying intensity on the sidelines. According from McElwain himself, he’s taken plenty from coach Saban in terms of his philosophy.

Following his normal press conference protocol, Saban gave very little insight on what his team will be doing against the Florida Gators in the SEC Championship Game. Saban did, however, give insight on McElwain’s ability to get along with everyone during his time at Alabama.

While the two competitive coaches may be all compliments in the days leading up to the game, expect the competitive fire to make an appearance on both sidelines in Atlanta.