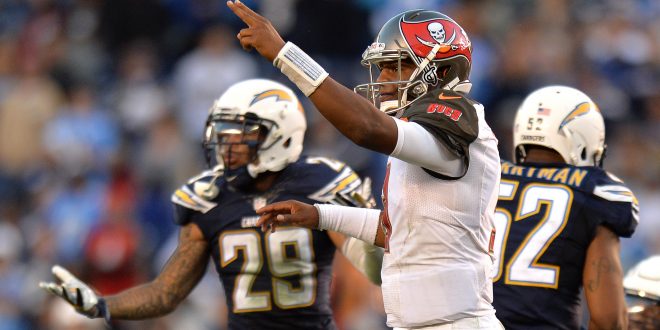 The Tampa Bay Buccaneers have now won their fourth game in a row after coming back to beat the San Diego Charger 28-21 on the road. On top of keeping their winning streak alive, the Bucs are now also tied for first place in the NFC South with the Atlanta Falcons.

The Falcons and Buccaneers split the series and have the same record, but if the season were to end today, Atlanta would take the playoff spot due to a better division record.

For the game versus the Chargers, the Bucs swapped touchdowns in the first quarter and then were down the entire game after that. That is, until the fourth quarter. That’s when quarterback Jameis Winston threw a 12 yard pass in the end zone with nine minutes remaining to Cameron Brate, and the Bucs took the lead 26-21. With the two point conversion being successful, the Bucs went up 28-21.

Jameis Winston mentioned how these past games they have they been finishing strong, and how they must continue. In the game, Winston completed 20 of 30 passes and threw for 280 yards with one touchdown and one interception.

In the past four games, they’ve had to fight to win and head coach Dirk Koetter mentions that this game against the Chargers, they had to overcome adversity.

The Bucs need to continue their play and hope Atlanta loses their next few games. Up next for the Bucs they host the New Orleans Saints and then travel to Dallas to face the Cowboys, who have already clinched a playoff spot. For Atlanta, their next two games are easier as they host the Los Angeles Rams next week and then travel to San Francisco and play against the 49ers.

The NFC South has now become more competitive and it looks like it’ll come down to either Atlanta or Tampa Bay to win the division.

Winston believes that his team has yet to arrive and that there is much more to expect from the team.