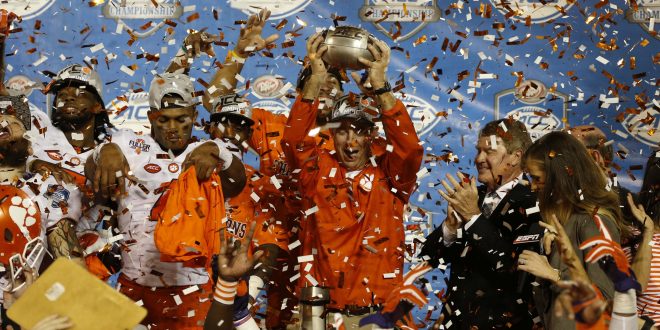 The top ranked Crimson Tide took home the SEC Championship after overwhelming the Florida Gators 54-16. This is the third straight year undefeated Alabama (13-0) is in the playoff. Head coach Nick Saban said this is this team’s chance to make a name for themselves, but it won’t be easy. Any team at this point can take home the trophy and the first step for Alabama to leave the legacy Saban mentioned will begin at the Peach Bowl in Atlanta on Dec. 31.

It’s been 24 years since Washington took home the championship and this year the fourth-ranked Huskies (12-1) are coming off of winning the Pacific-12 championship, running over Colorado 41-10. Fans at the game were seen holding up signs saying “We Want Bama” and now, they got them.

Washington head coach Chris Peterson has never coached against Nick Saban and had a response to all those fans ready to take on the Crimson Tide. Peterson said you can be grateful for the opportunity to compete.

Another team that doesn’t make it to the dance quite as frequently is Ohio State. This is the second time the Buckeyes have made it to the playoffs, first in 2014 under head coach Urban Myer when they won it all. Myer on the other hand, is not a newcomer to national success; he led the Florida Gators to BCS Championships in 2006 and 2008. As for his Buckeyes, Myer said he wants his team to accept the selection with grace since many other teams were also high-quality candidates.

One of those team that didn’t make the playoffs and garnered some dispute amongst fans is Penn State. The Dittany Lions finished out the season strong, winning out nine straight games.

Can you imagine Ohio State fan reaction if they were 11-2, won Big Ten, beat Penn State head-to-head & 11-1 PSU got in playoff?

This included winning the Big 10 Conference Championship with a 38-31 victory over No. 6 Wisconsin. Before the rankings were released, Penn State head coach James Franklin said he was happy with wherever the selection committee placed his team. But felt like they made a case to be a contender for the national championship.

Michigan beat Big 10 champ Penn State 49-10 and took OhioSt to 2 OTs at OhioSt. Michigan is one of the four best teams in the country.

But the selection didn’t come down to Ohio State and Penn State but Washington. College Football Playoff Chairman Kirby Holcutt says picking Washington over Penn State is the right decision and explained some of the committee’s reasoning.

Now Penn State will play for the Rose Bowl on Jan. 2 and compete with the USC Trojans.

Clemson, who claimed the ACC Championship and finished out the season 12-1 and is in the playoffs for the second consecutive season. Last time the two teams faced off was in 2013, one of their two meetings which are both in both games.

Tigers head coach Dabo Swinney reiterated what many of the coaches have said, that you have to be a good team to make it this far and that in this match ups instance, he is very familiar with many of the Buckeye players. The Buckeyes and Tigers will meet at the Fiesta Bowl in Glendale, Arizona, on Dec. 31.

A national championship always carries weight but for any of these teams it could mean even more. A repeat for Alabama, Ohio State’s second playoff appearance, first since 1991 for Washington or redemption for Clemson.

And with any predictions, only January will tell who will lift up the national championship trophy.

Previous Florida Gators are Tampa Bound, Will Play in the Outback Bowl
Next Bucs Tied For First Place In NFC South