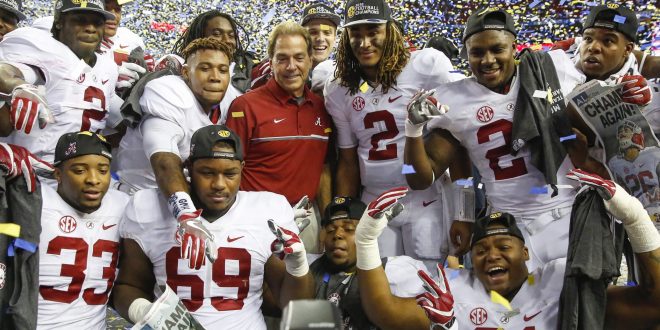 The time for debating, What Ifs, and If Onlys ended about a month ago. The college football playoff committee tabbed Alabama, Clemson, Ohio State and Washington in that order to fight for a chance at a championship berth on New Year’s Eve. Each team has a title under its belt, but Washington and Clemson have a combined drought of 60 years.

Outside of Washington, the other teams are quite familiar with the final four. Ohio State won the first CFB Playoff in 2014, Alabama won it last year and Clemson won the Orange Bowl in 2013, considered a playoff game during the BCS era. Here’s a close look at each game and what you can expect.

In another season full of chaos and upsets, Alabama stayed as steady as possible, never once showing a crack in their armor. The team began the preseason as the best team in the sport and ended the season there as well with a spotless record. Nick Saban’s team does nearly everything well, but if they do one thing best it’s stop other teams from scoring. In the team’s 13 games, opposing squads have come within 10 points of ‘Bama only twice — a 48-43 victory at Miss. St and a 10-0 shutout at LSU. The Tide allow a meager 11.8 points per game (1st in FBS), 63.4 rushing yards per game (1st in FBS), 184.5 passing yards per game (15th in FBS) and an overall 248 yards per game (1st in FBS). The defense also punishes other teams’ mistakes. Alabama has scored 14 non-offensive touchdowns.

Would you believe me if I told you they exerted all this domination using a freshman quarterback? Jalen Hurts, an SEC All-Freshman, has been a catalyst for the team, building chemistry with multiple receivers and wreaking havoc with his legs. The dual-threat QB is second on the team with 841 rushing yards but has a team-high 12 scores on the ground. He’s efficient in the air, too, with 2,592 yards, a 65 percent completion rate and 22 to 9 TD to INT. Hurts’ primary targets are Calvin Ridley (727 yards, 7 touchdowns) and ArDarius Stewart (852 yards, 8 touchdowns). The team methodically dissects their opponents. Even if you can shut down their passing game like Florida did in the SEC Championship, they’ll run you over and capitalize on your mistakes.

Any Hope for Washington?

If you’re Washington, how do you stop this near-flawless team? Try to disrupt the passing game and force Alabama to get one dimensional. Hurts is efficient, but not invulnerable. He threw two picks in one half against Auburn on Nov.26. The Huskies have a big defensive line and on top of that, their secondary can limit Stewart and Ridley. Washington is no slouch in defending the passing game, allowing just 192 yards in the air per game, just seven spots back from Alabama. Washington is also strong at defending the run (18th in the country), but Alabama is literally twice as good (63 rushing ypg allowed vs. 122).

Watching Washington Huskies defensive tape and it's obvious that Alabama's offense will have their hands full. Could be game like LSU/AL

The Huskies aren’t hurting for offense, either. QB Jake Browning is a more traditional signal caller, finishing with 3,280 yards and a whopping 42 touchdowns with only seven interceptions. Unlike Alabama’s Hurts who does damage in the rushing department, the Huskies rely primarily on RB Myles Gaskin. He racked up 1,339 yards with 10 scores. But it’s fair to wonder if he can even crack 100 rushing yards against the best run-defense in the country. Instead, Browning may turn to playmakers John Ross (1,122 receiving years, 17 touchdowns) and Dante Pettis (796 yards, 14 TD).

The Huskies must not make a single mistake and have to have one, maybe two explosive plays to have a shot at taking down the best team in the playoffs. Currently, Alabama is a 16-point favorite.

Unlike the day’s earlier game, this one may not have a clear-cut favorite. Vegas odds pegs the Buckeyes as 3-point favorites, which is usually just a push. Both Urban Meyer of the Buckeyes and Dabo Swinney of Clemson have plenty of big-game experience. But if one wants to advance to the championship game, a lot of it relies on their quarterbacks.

Clemson’s Deshaun Watson is no stranger to the national audience. Last year his top-ranked team failed to topple Alabama in the national championship game in a nail-biting 45-40 thriller. He returns to the same stadium this time seeking to topple the Buckeyes. Watson cut through Virginia Tech in the ACC Championship Game, accounting for three touchdowns in the air and two more on the ground. The Heisman finalist has 17 total touchdowns in his last four games and has only scored one touchdown once (season opener vs. Auburn).

If Watson can’t get it going with his legs, then he’ll turn to Mike Williams, who has 1,171 receiving yards and 10 touchdowns on the season. Running back Wayne Gallman is the team’s leading rusher with just over 1,000 yards and 15 scores.

On the other side, J.T. Barrett is in charge of leading the Buckeyes. His numbers aren’t as eye-popping as Watson’s (Barrett has 2,428 yards and 24 passing TD), but he’s a similar dual-threat QB. He’s rushed for 847 yards (about 300 more than Watson) and has nine rushing touchdowns. But cause for concern arises when examining Barrett’s play versus top teams. In six games against Indiana, Wisconsin, Penn State, Nebraska, Michigan State and Michigan he had an average 56 percent completion rate, eight passing touchdowns and three picks.  Against Penn State, the Buckeyes’ only loss, they shut down his running game.

If Barrett can’t run, he’ll turn to Curtis Samuel in the air. Samuel is a dual-threat player, with 822 receiving yards and seven scores in the air and 704 rushing yards with eight scores on the ground. Clemson, who yields on 18.4 points per game, has to contend in shutting down both of them.

If one thing sets both teams apart every so slightly it’s Ohio State’s ability to finish. In the red zone, the Buckeyes convert 87.1 percent of the time while Clemson clocks in at 83.8 percent. And while three percentage points seems trivial, it’s a difference between 38th in the country and 67th.

Watson has shown the propensity to create big plays. He’ll need to do that one more time to get his team back to the championship game. Barrett was forced to watch the team’s last championship run from the sidelines. He’ll look to prove that he can be just as successful now that he’s under center.