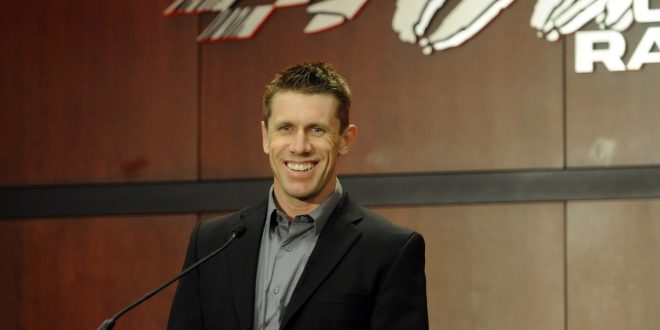 It was announced in a press conference on Wednesday that Carl Edwards would be stepping away from NASCAR.

The announcement came as a shock to most. Despite being healthy and possibly at the peak of his career, Edwards has decided that his full-time career in racing is finished.

In the press conference, he explained many reasons why he felt that now is the right time to leave the sport he loves. One of those reasons is that he could walk away satisfied with his career. In 445 career starts, he won 28 races including three in 2016. In 2007, he won the NASCAR Busch Series championship and came close to winning the NASCAR Sprint Cup Series in 2011, but fell short when he lost a tiebreaker to Tony Stewart. He qualified for the chase last year, but got into a crash in the final race.

Really happy for Carl Edwards. One of the fastest guys you'll ever race. Great to see him doing what he wants after an incredible career.

Thank you #carledwards for what you did for our team over the last 2 years, and welcome @Daniel_SuarezG to @JoeGibbsRacing cup team.

Edwards was adamant that his health is not an issue, but he would rather step away now while he is in good condition. With the recent concussion issues that have plagued Dale Earnhardt Jr., Edwards realizes the risks that come with race car driving.

During most of his career, Edwards raced for Rousch Fenway Racing beginning in 2005. For the last two years, he raced for Joe Gibbs Racing. With one year left in his contract he has stated that the decision did not have anything to do with contract negotiations or disagreements with NASCAR. He has strayed from referring to his departure as “retirement,” although he has no plans to return full-time. If he comes back in any way, he said it would be with Coach Gibbs because he has the best team.

Congratulations to #CarlEdwards on an amazing career. Keep on flippin'. pic.twitter.com/kkUh8ulzJF

Edwards leaves NASCAR with a great reputation as someone that was always genuine. Every win he finished with a back flip as he got out of his race car. Carl Edwards will leave a lasting impression on the history of racing.