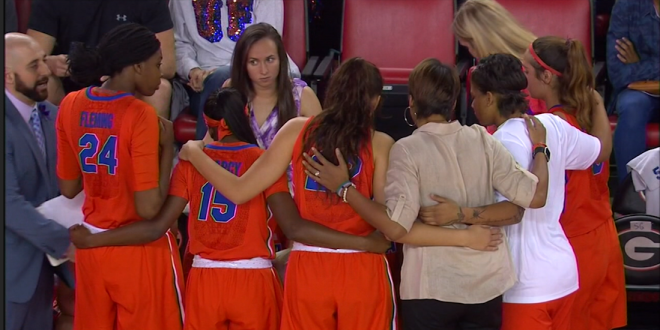 After starting 0-5 in conference play, the Florida women’s basketball team went on the road and held off a furious late-game rally to defeat Georgia 76-68. The win marks Florida’s first SEC win of the season and improves them to 10-9 overall, while the loss also puts Georgia at 10-9 and drops them to 2-4 in the SEC.

Four players scored in double digits for the Gators, as forward Ronni Williams led the way with 16 points and seven rebounds. Haley Lorenzen pitched in with an 11-point-10-rebound double-double and Brooke Copeland contributed with three baskets from beyond the arc. Dyandria Anderson was named player of the game, scoring in double figures while also bringing down six boards and getting four assists.

For Georgia, Pachis Roberts led all scorers with 26 points, including a 15-for-16 performance from the free-throw line. Mackenzie Engram also put in a good game, scoring 18 points while leading the team in playing time with 37 minutes of action.

The game was closely contested in the first half, nothing uncommon for a rivalry game. The first 20 minutes saw six lead changes, with the Gators leading 35-33 at halftime. Head Coach Amanda Butler said that Florida’s rebounding and perimeter shooting stood out in the opening half.

Florida came out on fire in the second half. They jumped out to a 53-36 lead with three minutes left in third, utilizing an 18-3 run to put some distance between them and Georgia. The lead marked the Gators’ largest lead of the season in SEC play.

Florida attacked the paint and the offensive glass, as they did throughout the whole game. Florida outscored Georgia 38-22 inside the painted area and grabbed 17 offensive rebounds to lead them to 22 second-chance points on the day.

The Gators ended the third quarter with a 56-43 lead after outscoring Georgia 21-10 in the period.

Then, out of nowhere, Georgia came alive in the fourth quarter.

The defense caused Florida to go cold, and the offense was sparked by the play of Roberts and Engram, to go along with a couple of key three-pointers.

By the time the clock read 4:19 left to go in the fourth quarter, Georgia had cut the deficit to one point, storming back to make it a 62-61 game.

At that point, the Gators had to overcome the adversity of a blown lead and show the kind of mental toughness that Butler referenced after the game.

And overcome adversity, they did.

It started immediately with a Brooke Copeland three to end Georgia’s 18-2 run, and ended with Florida closing out the game on a 7-0 run. Williams came up big down the stretch, scoring eight of Florida’s last 10 points, including a clutch put-back to make it a three-point game with 55 seconds left. She tacked on four free-throws at the end to ice the game.

The win marks the end of a five-game skid for Florida, and is only their second win in their last nine meetings against Georgia. It’s the program’s sixth win ever at Georgia, and Butler talks about the importance of road wins, saying her old coach used to say they “count double”.

Florida will be back at Exactech Arena on Thursday night, as they will host Tennessee. Tip-off will be at 7 p.m.

Native New Englander. Follow me on Twitter: @jonacosta_10
@jonacosta_10
Previous La Liga: Round 19
Next Former Gators Neal & Poole Have a Date with the Super Bowl