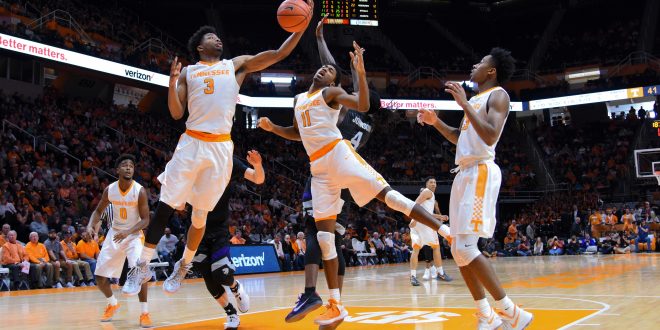 The Tennessee Vols Men’s Basketball team makes their way over to Auburn today to see a familiar face of their former coach Bruce Pearl, but more importantly to take on the Auburn Tigers. The game takes place on Tuesday, January 31st at 9 o’clock p.m. at the Auburn Arena in Alabama. Although the Vols have a shaky-looking record of 12-9, they have proven their worth by playing a number 3 ranked schedule. Due to this heavy schedule, Tennessee has moved up 21 spots in the RPI to now be ranked as 41st. The Tigers on the other hand have a record of 14-7 and ranked 61st through RPI. There schedule strength is ranked 67th.

In Auburn’s last 4 games, they’ve successfully taken home 3 wins. However, their one loss was by 29 points to South Carolina. Overall in the SEC, their record is 3-5.

“Tennessee is, along with South Carolina, probably the hardest playing team in the league,” Pearl said.

After a tough loss to the Gamecocks, the Tigers are coming off of a win to the Texas Christian University Horned Frogs. Freshman Center Austin Wiley scored 25 points in this game and had seven rebounds. Point guard Mustapha Heron also scored 17 points. Point guard Jared Harper had 13 points, four assists and three rebounds. Lastly, guard T.J. Dunans had seven assists and seven rebounds. With this winning momentum, Coach Bruce Pearl is making the team watch film from this game in an effort to continue the trend.

Tennessee stands with a 4-4 record in the SEC currently. The Vols have a younger team playing with 11 underclassmen on their roster. Recently, Tennessee defeated the number 8 in the RPI Wildcats and also defeated Kansas State at Tennessee’s home game. During the Wildcats game, Tennessee shooting guard Robert Hubbs III scored 25 points, had seven rebounds and two assists. As of Tuesday, January 31st, Hubbs was ranked basketball player of the week. With a hard schedule this season, Tennessee has been giving it their all. Some of the losses were to the number-seven-ranked Tar Heels, and the number-one-ranked Gonzaga Bulldogs.

“Tennessee has got some really key weapons,” Pearl said. “They’re playing nine guys. They’re bodying. They’re dialed in. It’s going to be a great matchup. … They’re probably the hottest team in our league right now. As far as who’s playing the best right now, I’d say it’d be hard to not keep Tennessee off that list right now.”