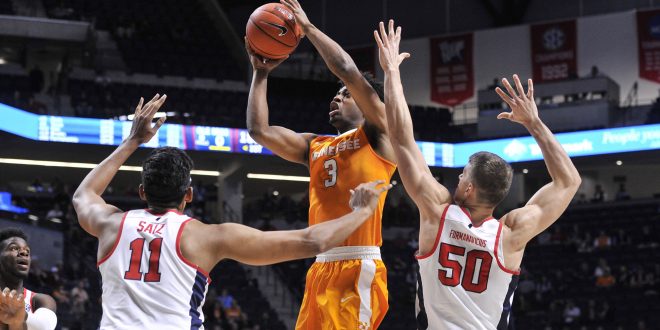 The Tennessee Volunteers and the Ole Miss Rebels will be taking the court tonight in Knoxville. These two teams have already faced off against each other once this season. Ole Miss came out on top last time, but Tennessee has gained momentum since that loss. The Vols will look to keep their momentum in hopes of a different outcome in tonight’s game.

As previously mentioned, this is the second matchup this season between Tennessee and Ole Miss. The Rebels won by a score of 80-69. This was also the game where Ole Miss guard Rasheed Brooks suffered a seizure on the sideline.

Since that matchup, Tennessee has gained a lot of momentum, going 4-1. The Vols even pulled of an incredible upset against SEC rival Kentucky. Ole Miss has held a record of 3-2 during that time span, putting their season record at 14-9 in a competitive southeastern conference.

Volunteers Look to Bounce Back

Tennessee has been on a roll since their last meeting with the Rebels. However, they did suffer a heartbreaking loss to Mississippi State over the weekend. After having a 19 point lead, the Vols simply could not hold off the Bulldogs. Mississippi State ended up taking that game 64-59. Tennessee will be looking to bounce back from that loss and turn things around against Ole Miss.

Born and raised at the ballpark! Typically quiet- until it comes to sports. I'm a South Florida native with a passion for baseball nearly as strong as my faith. Grew up in garnet + gold, turned out sporting orange + blue. Likely to be found with a camera. And yes, I take food pictures.
@victoriarossman
Previous Heat On Verge Of Odd Record When They Face Bucks
Next Florida Men’s Tennis Recap