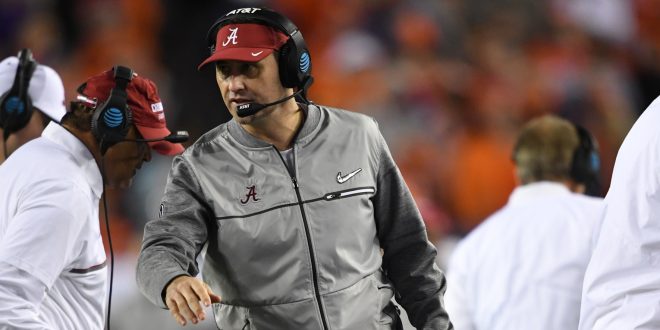 After “rising up” to make it to Super Bowl 2017 and falling to  the New England Patriots, the Atlanta Falcons are already seeing some adjustments within the organization. The Falcons announced on Tuesday that they have hired former Alabama offensive coordinator Steve Sarkisian as their new offensive coordinator.

The hire comes after losing former OC Kyle Shanahan to the San Francisco 49ers, who will serve as head coach.

There wasn’t much presage to indicate Sarkisian was the Falcons’ top choice. Rumors pinned former 49ers head coach Chip Kelley as a potential candidate for the job but the deal with Sarkisian was in the works for weeks.

Shanahan, along with Falcons’ quarterback Matt Ryan, have developed an outside zone run-blocking scheme with play-action passes off the run plays. It obviously works; Ryan earned NFL MVP honors and took the team to the big show.

But Atlanta Falcons head coach Dan Quinn said he admires Sarkisian for his play calling and is confident in the hire to work for the program.

Falcons plan to keep the offense the same: https://t.co/1rkhGEIiaC pic.twitter.com/bVPObHlHeD

No Trouble in ATL

Sarkisian experience spans from coaching for the USC Trojans, Oakland Raiders and Washington Huskies. He served at USC twice, the second time as head coach. He was fired after two year in October 2015 due to alcohol problems. Players reportedly smelled alcohol on his breath.

Quinn dispelled any doubts that would be an issue and said Sarkisian completely aligns with the Falcons’ team values.

How Will The Crimson Tide Roll?

This leaves Alabama looking for a new offensive coordinator for the third time this year. They started the with Lane Kiffin, who left Alabama after the Chick-fil-A Peach Bowl victory against Washington to take over at Florida Atlantic University.

Sarkisian was promoted to OC for the National Championship to finish out the season. Now that he is on his way out of Tuscaloosa, the biggest question this spring will be who comes in and can gel with Alabama head coach Nick Saban.

Sarkisian isn’t the only change to Atlanta’s coaching staff. The Falcons fired defensive coordinator Richard Smith and defensive line coach Bryan Cox The Falcons said that the decision to dismiss the coaches is not based on the defense’s performance in the Super Bowl.

For the young Falcons to no climb to the gauntlet and not bring home the hardware is tough. They’ll either focus in and fine tune for another go ’round, or fall victim to the disappointment of letting it slip away. But with energetic, young players returning with a taste of what it takes and fresh perspective in key positions, the Falcons could use it all as fuel for success.