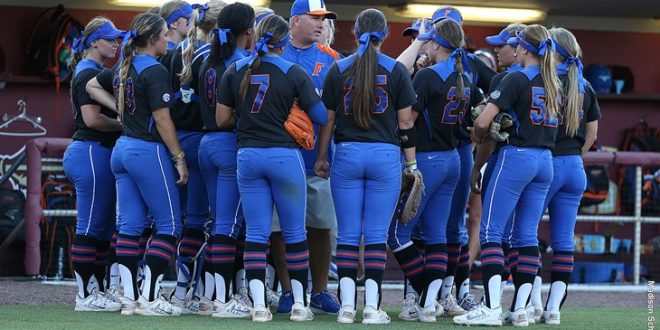 TAMPA, FL –  The Florida Gator softball team now has an overall record of 5-0 after competing in the USF- Wilson DiMarini tournament in Tampa over the weekend. The Gators played one game on Friday, two on Saturday and two on Sunday to wrap up an extraordinary opening weekend.

The Florida Gators opened up the tournament and the season with a match up against Illinois State on Friday. Florida took care of Illinois State rather quickly with a five inning shutout victory and a final score of 9-0. Senior left-handed pitcher Delanie Gourley tossed her eighth career one-hitter in the win over the Redbirds. Gourley recorded 12 strikeouts out of the 16 batters she faced.

Let your friends know that the season has OFFICIALLY started as the #Gators take the 2017 season opener over Illinois State‼️ pic.twitter.com/niM7ntH7iR

The Gators woke up bright and early on Saturday morning to take on St. Johns University at 10 am. Sophomore Amanda Lorenz started the offensive momentum early on in the game with a two-run home run in the bottom of the first inning to put Florida ahead 2-0. In the circle, Aleshia Ocasio took care of her job, only giving up one hit through the first four innings. Ocasio also had a fantastic game in the batters box. In the bottom of the sixth inning, the first team All-American blasted a three run home run to extend the Gator lead to 5-2.

Florida didn’t have much time to recover after their victory over St. Johns. At two o’clock they faced the sixth ranked team in the country, the Michigan Wolverines. This game gave the capacity crowd at USF’s stadium something to talk about,as the Wolverines and the Gators dueled it out for 10 innings until Florida finally won 2-1. The combination in the circle of sophomore Kelly Barnhill and senior Delanie Gourley gave the Gators the much needed edge to beat the Wolverines. Barnhill started the game and lasted seven full innings before handing the ball off to Gourley, who would take it from there. Offensively, both teams nickeled and dimed their way to runs back and forth throughout the entire game until the 10th inning when the Gators won on an RBI single to center field.

Florida finished off the weekend with a double header sweep on Sunday. In the first game, Florida took on Delaware where freshman Katie Chronister got her first career start for the Gators.  She threw 55 pitches, allowed just one hit while striking out four batters as the Gators breezed to a 9-0 win. After their win over Delaware, the Gators focused all of their efforts on the home team, USF. Kelly Barnhill received the start in this game and she did not disappoint, joining Chronister in throwing a one-hitter. She nearly threw a perfect game, striking out 12 of the 19 batters she faced with zero walks. Amanda Lorenz opened up the scoring offensively in the top of the third inning with a three-run home run. Final score was 8-0.

The Florida Gators will hit the road one last time before their home opening weekend. Florida will take on Jacksonville University in Jacksonville on Wednesday before heading home to host the Aquafina Invitational this weekend.