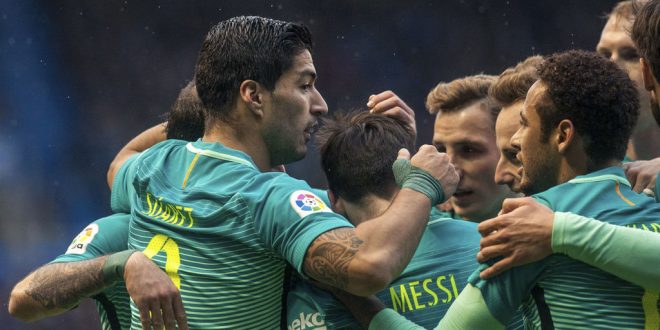 After the yearly marathon for the domestic cup in the month of January, FC Barcelona found the way to beat Atlético de Madrid in a controversial semifinal and advance to the Copa del Rey final for the fourth time in a row. Meanwhile, Deportivo Alavés have another reason to celebrate in their historical season after beating RC Celta de Vigo and advancing to the final, too. Before the final in May, these two teams faced each other once again and ended up getting a very different result from the one in the first leg.

The hosts, which were the fifth best defense before entering to this game with 22 goals allowed, deployed their typical defensive minded game. Mauricio Pellegrino‘s men transformed their 4-3-2-1 scheme very early in the game to a 5-4-1 scheme. Daniel Torres was the most crucial player in that tactical movement because he was in charge of being in constant movement when switching positions.

The problem about defending too close to your goalie against Barcelona is that the team allows too much space for Barcelona’s midfielders to deploy their positional game. That is exactly what happened in this game. With Sergio Busquets‘ comeback to the starting lineup, Barcelona found their pace and gave more fluidity to the ball movement. André Gomes had the chance to be more involved up front by playing on his natural position as an interior midfielder. This also allowed Lionel Messi to spend more time inside the rival’s box and not worrying too much about going back and being the main passing connector of the team.

Barcelona’s triangulated passing was at its best in this game when playing near the rival’s box. Everyone was involved on each of the build-ups. In the 36th minute, Messi sent one of his typical long-diagonal passes from right to left to Neymar. The Brazilian drove the ball to the middle to drag defenders, open spaces and find Ivan Rakitić. Rakitić turned his body to sent a quick, short pass to Aleix Vidal, who sent the assist to Luis Suárez for the first goal of the game.

This first goal meant a lot for Barcelona because they took absolute control of the game after that moment. Three minutes later, the MSN made one of its magical connections once again. On the left wing, Suárez passed it to Messi, so the Argentinian could send the ball back to him through a diagonal pass in the edge of the area. Fernando Pacheco, Alavés’ goalkeeper, made the mistake of trying to deflect that ball with just one hand. The ball rebounded on Suárez’ face and ended up being an assists to Neymar, who only had to touch it with his left foot to add the second goal for his team.

Barcelona’s cruise control of the game continued in the second half. In the 59th minute, Messi stole the ball from Carlos Martín Vigaray on the edge of the box and drove it to wait for the perfect moment to sent the strike through the legs of Pacheco. Barcelona punched again four minutes later. Suárez dribbled Víctor Laguardia and sent a through pass to Messi. The Argentinian controlled it for a second but lost it after a Theo Hernández tackle. It did not matter because, after that tackle, the ball was deflected by Alexis Ruano and ended up being an own goal.

The visitors were able to close out this game in just ten minutes with four goals. Two minutes later after Ruano’s own goal, Rakitić sent a powerful shot after a fantastic counter-attack initiated by Suárez who stole the ball, passed it right away to Messi and run to the box to receive it once again and assist the Croatian with a back-heel pass.

It took just another two minutes for Barcelona to score the sixth and final goal of the game. Another counter-attack in which the MSN was the protagonist. Messi drove the ball through the middle and passed it to Suárez who was on the right side and waiting for Neymar to make the cut through the left side. The Uruguayan crossed it to Neymar. The Brazilian hold it and sent the strike that was deflected by Pacheco. The goalkeeper could not control the ball and was beaten by Suárez who scored the goal after the deflection.

Barcelona needed less than 70 minutes to beat Deportivo Aláves. But unfortunately, the game did not end at that moment. In the 84th minute, Vidal broke his right ankle after being tackle by Hernández. Vidal’s recovery is expected to last at least five months, according to the club’s webpage.

Besides Vidal’s awful injury, Barcelona ha a fantastic performance on every aspect of the game. Busquets and Andrés Iniesta‘s comebacks are great news for the team. Two players who are the pillar for Barcelona’s positional game.