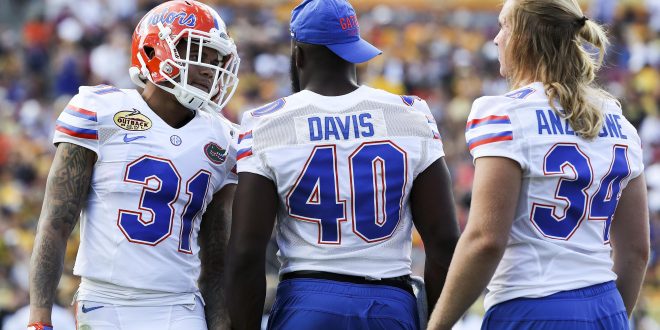 Two weeks ago, the NFL season came to an end and the New England Patriots were crowned champions for the fifth time in franchise history. We’ve reached that time of year when football fans are blessed with the best of both worlds. When their Saturday fandemonium collides with their Sunday fandemonium. When there’s no college football on Saturdays and no NFL on Sundays.

This is when the players from their college team is striving to earn a spot on the roster of their favorite NFL franchise’s roster. This year, and arguably every year, the NFL really likes what the SEC has to offer. Especially what the SEC East Champions Florida Gators have to offer. With a total of eight Gators being invited to the NFL Combine, a Gator fan would say the 2017 NFL Draft is “Gator Bait.”

Tabor started in 12 games this past season and grabbed four interceptions and 33 tackles. Interceptions aren’t the only thing the junior grabbed this season—he grabbed Second Team All-American honors and one of the fuels to the fire in the DBU debate.

Quincy, alongside Tabor, collected 33 tackles for the Gators. The Junior was one of two Gators to start in all 13 games this season for Florida. That allowed him to campaign why he is one of the top-rated prospects coming out of Gainesville. Despite the high-profile nature of the two, how could you argue against any of the other five players?

Senior Marcus Maye concludes the list of secondary players from Florida invited to the combine. Maye has always been a threat for opposing offensives, but this season his presence in the backfield was cut short. The senior injured his arm against the South Carolina Gamecocks. Prior to the injury, he snagged 50 tackles for the Gator defense.

The redshirt junior also had his season cut short due to an injured arm. His 54 tackles this season made the argument that this was his best season in The Swamp. Anzalone’s leadership on the field and on the sideline could definitely be used at the next level.

This senior was another one of the key leaders for the Gator defense. He missed out on four of his games, but his presence was always felt (especially felt by the opposing team.) He recorded 60 tackles despite missing nine games with an ankle injury. The linebacker was named Second Team All-American honors and is expected to make an impact on an NFL roster.

He missed out on the majority of his senior season because of injuries, but always made a difference when he was lined up with the defense. Cox Jr. only started 28 games during this time in orange and blue, but with his size and quickness, there’s no surprise he was invited to the combine.

The redshirt junior is projected to have his name called on day one of the NFL Draft. Making Second Team All-SEC, the defensive lineman led the Florida roster in tackles for loss with a total of 9.5

The offensive tackle is the only Gator from offense to get an invite to the combine. Sharpe started for two years and was a key role in improving Florida’s offense up front. The junior started every game for Florida and will probably get a few early starts on an NFL roster.

A senior at the University of Florida reporting on Gator sports, local Gainesville and surrounding area sports, and telling the stories of local athletes. Born and raised in Gainesville, Florida with a passion for telling people's stories and having fun doing it.
@SportsDarwinism
Previous Justin Leon Key to the Gator Men’s Basketball Success
Next Gator Golf Kicks Off the Season With a Win