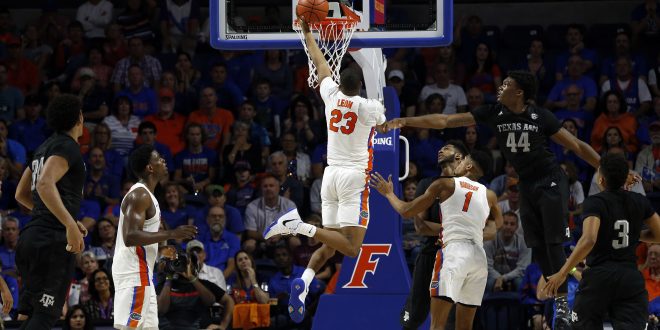 Florida men’s basketball senior Justin Leon has become one of the Gators’ strongest players this season.  Leon has worked hard as an undersized forward to stay strong against his opponents.  He is also putting in time to have a more consistent 3-point shot.  All of his hard is paying off, especially in his last game against Texas A&M.

The Gators are 20-5 for the season and 10-2 in the SEC.  The team is in a three-way tie for first place with Kentucky and South Carolina.

This has been Leon’s breakout season. In a Jan.7 bout vs. Tennessee, he scored a career-high 19 points and has six double-digit scoring games. The biggest improvement has been his three-point shooting. After every practice, Leon and Devin Robinson stay and practice shooting three-pointers.  They each have to make 20 out of 30 shots at seven different spots behind the arc.  Some days, they’re there for a short time, other days, they’re in the gym for hours. Practice has paid off, as he leads his team with a 41 percent three-point mark.

As an undersized forward, he is training hard be a strong defender against other teams’ forwards.  Leon constantly goes up against forwards who are thirty pounds bigger than him.  He says he goes out every game and gives it his all.

Leon says his community college coach helped him find confidence in his shot.  Now, his teammates can tell when Leon is ready and set to shoot.

Last season, Leon moved to the starting lineup and started 11 games.  He came from playing at Shawnee Community College and was getting use to playing as a Gator.  Head Coach Mike White likes his consistency in effort throughout the season.

Leon is a key player for the Gators, but he would never admit it.  Leon says the team’s success comes from them playing together and not being selfish.

The Gators support each other and that support is seen when they play as a team.  Last year, the team only worried about themselves and didn’t focus on playing as a team, Leon says.  Now the Gators are working on keeping all distractions out and keeping the team play strong.

The Gators play at Auburn on Tuesday at 7 p.m.  The team is looking to increase their SEC winning streak to seven games.  The game will be aired live on the SEC Network and can be listened to on the Gator IMG Sports Network with Mike Hubert and Bill Koss.

Nicolette is a senior at the University of Florida who has participated and enjoys reporting on all things related to sports.
Previous Florida Women’s Soccer Team Welcomes Six New Recruits
Next NFL Combine: Eight Gators Invited to Showcase Their Skills