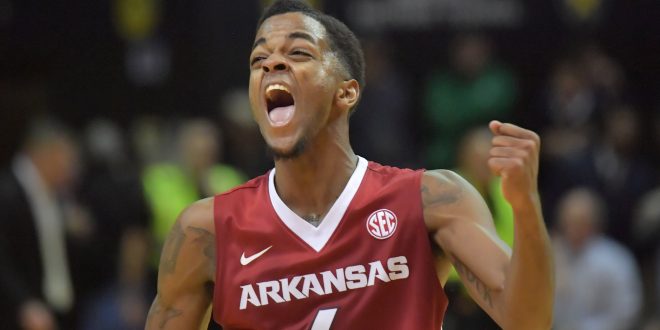 The Texas A&M Men’s Basketball Team is back in action as they travel to Arkansas on Wednesday, February 21 to take on an SEC rival, the Arkansas Razorbacks. Tip off is set for 8:30 pm at the Bud Walton Arena. The Aggies have an overall record of 14-12 and an SEC record of 6-8. The Razorbacks on the other hand have a record of 20-7 and an in conference record of 9-5. Although the records show that Arkansas has had a better season than Texas A&M, Razorback Head Basketball Coach Mike Anderson is not fully confident that this will be an easy win.

The Razorback’s hold a better record than the Aggies, but this does not allow Coach Anderson to forget the score of their last game against Texas A&M. On January 17,2017, Arkansas slipped by and defeated Texas A&M by just two points with a final score of 62-60.

As the season has progressed, so have Arkansas’ players. One player that has stood out in the most recent games this season is #4 guard Daryl Macon. Macon. Macon has continued to prove himself throughout the month of February with his scoring ability. Scoring an average of 13.7 points per game, 2.6 rebounds a game, and 2.2 assists per game, Macon is shining.

Congrats @YoD4__ on your first @SEC Player of the Week honor! pic.twitter.com/FsSTLWKbFT

Macon brings the points to the game, but the way the whole team has been playing, is what is bringing their team together said Anderson.

Even with their team coming together, Anderson said they still need to give it their all in this game. The Razorbacks are going to have to keep it chaotic on the court, said Anderson, but more importantly make sure that it is not a half court game.

Kennedy sees some team successes, but he also does see weaknesses considering he said that this was one of the least athletic teams that he has ever coached.

One  player that Kennedy does see improving is #34 Center Tyler Davis. With an average of 14.1 points per game, 6.9 rebounds per game, and 1.5 assists per game, Davis has been bringing the energy that the Aggies need. However, Coach Kennedy said that he knows some things that even Davis needs to work on.

Previous College Baseball: Florida vs. Jacksonville
Next No. 13 Florida Resilient in 81-66 Win over South Carolina