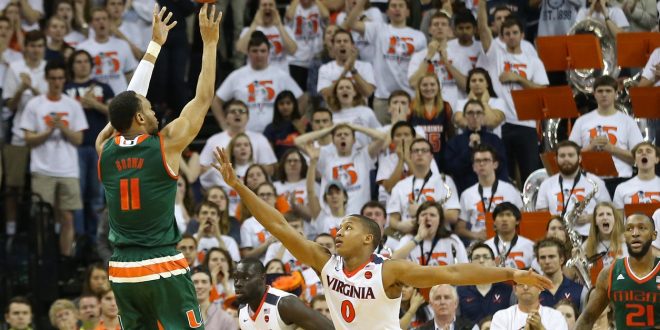 The Miami Hurricanes stole an overtime victory on the road and stretched the No. 18 Cavaliers’ losing streak to four straight in a 54-48 win at John Paul Jones Arena in Charlottesville.  Hurricanes freshmen guard Bruce Brown made a 3-pointer with 23.8 seconds left in overtime to secure the victory.

Brown scored 14 points to lead the Hurricanes (19-8, 9-6 in ACC) to their third consecutive victory.  The Canes jumped Virginia (18-9, 8-7 in ACC) in the ACC standings to move to sixth in the conference.

“I think this young team is finally catching our stride,” senior guard Devon Reed said.  “To be able to pull three in a row out is big for us.”

The Hurricanes shot a dismal 4-19 from 3-point range but they were able to hold Virginia the offensively challenged Virginia squad to 30% from the field.  Kamari Murphy logged a double-double with 10 points and 11 rebounds.  Cavaliers’ guard Devon Hall scored 15 points to lead all scorers.

March Madness is rapidly approaching, and with it comes rampant speculation as we await Selection Sunday and the reveal of the 68-team field for the NCAA tournament.  The Hurricanes are catching fire at the perfect time as March approaches.  ESPN college basketball analyst Joe Lunardi currently has Miami on the right side of the bubble for now.

Miami (In for now) 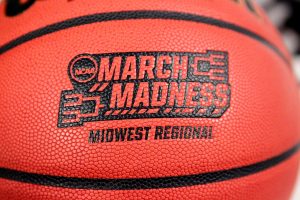 Before the game, current Milwaukee Buck and former Virginia player Malcolm Brogdon had his jersey retired.

Virginia continues to slide down the rankings.  The Cavaliers opened ACC play 7-2 and near the top of the league standings, then February happened.  The Cavs have dropped 5 of their last 6 and now find themselves clinging to the 18 seed in the AP Top 25.

Miami returns home to play a red hot and healthy Duke on Saturday. The Blue Devils struggled with injuries early in the season, but now have their full roster. That includes the return of Head Coach Mike Krzyzewski who missed time last month with back problems.