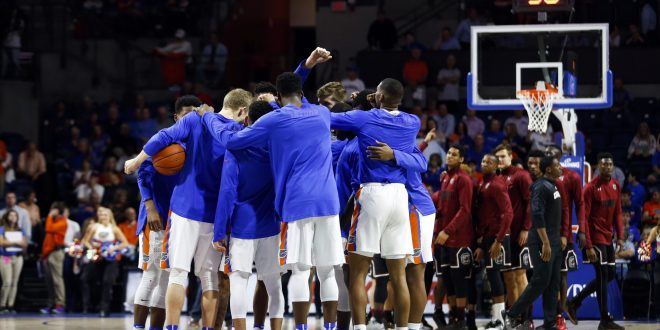 No. 13 Florida Resilient in 81-66 Win over South Carolina

Even with a date with Kentucky in sight, all of Florida’s attention was on South Carolina on Tuesday night as they picked up their ninth win in a row. The Florida Gators took down the South Carolina Gamecocks, 81-66, behind a stellar second half. UF outscored SCAR, 46-33, in the final twenty minutes. KeVaughn Allen was electric throughout the entire game, leading Florida with 26 points, while grabbing 7 rebounds in the process. He also went 13-14 from the free throw line. Sindarius Thornwell’s 23 points just weren’t enough as the Gators evened the season series to 1-1 vs. the Gamecocks. Florida Head Coach Mike White discussed what the team could have done better in the first half and where they could’ve improved on the interior. He also praised KeVaughn Allen for getting his offense going through rebounding and called Chris Chiozza “one of the best passers he’s ever coached.”

Chris Chiozza recorded his fifth straight game with at least 10 points, notching 12 on 3-6 shooting. Devin Robinson did it all for the Gators, filling the box score with 14 points, 6 rebounds, 3 blocks, 2 steals and 1 assist. Kasey Hill finished with 10 points, and committed 0 turnovers in the second half, but had four overall giveaways. After the game, KeVaughn Allen, despite his great performance, talked about what the Gators need to do better in closing out the first half.

Florida outshot South Carolina 49%-39% from the field and 47%-21% from beyond the arc. While the Gamecocks held the edge at the charity stripe at 86%-81%, UF outrebounded SCAR, 34-30. Florida did have some problems in the paint once again without Egbunu, as they were outscored 34-26 in the interior.

The Gators had 10 assists in the second half, significantly higher than their three in the first half. Florida also committed 16 total turnovers, but only four in the final twenty minutes. UF has also now clinched a top-four seed and a double-bye in the SEC Tournament.

"I think Florida is an elite team." -Frank Martin

Through the first three minutes both KeVaughn Allen and Duane Notice had all the points for their respective teams. The Gators led 6-3 with 17 minutes left in the first half. In the first game between these teams, it took almost six minutes for either team to score.

Through seven minutes played, KeVaughn Allen continued to impress. He had nine points and four rebounds with only one turnover. The Gators, without Egbunu for the second game in a row now, were outrebounding the Gamecocks, 9-4, at this point in the contest.

A Keith Stone offensive rebound and put back broke a streak of nineteen straight misses for the redshirt freshman. He had three offensive rebounds and two points with 9:30 left in the first half. At that point in the game, the Gators led 19-14.

Florida took their first 10-point lead of the game as they led, 26-16, with six minutes to go in the first frame. KeVaughn Allen was the first Gator in double-digit scoring, totaling 12 points on 3-4 shooting, with two of those makes coming from behind the arc.

A 9-0 run brought South Carolina back within three with 2:39 left to go in the first twenty minutes. This season, Florida has had real trouble closing the first half of games with a strong lead.

Florida closed the first half on a 5-0 run, but it was South Carolina’s 17-7 run in the final 6:11 of the first frame that brought the game so close. The Gators led 35-33 at the end of the first twenty minutes.

KeVaughn Allen led all scorers with 14 points on 4-6 shooting in the first frame. Duane Notice had nine points to lead South Carolina, while Sindarius Thornwell was contained to eight points. The Gators outrebounded the Gamecocks, 19-15 in the first half, but had 12 turnovers to South Carolina’s 11. Both teams had 14 points in the paint, while Florida’s bench outscored SCAR’s, 9-3.

The Gators shot 44% from the floor and 30% from downtown in the first half, while the Gamecocks shot 38% overall and 43% from beyond the arc. Both teams shot pretty well from the charity stripe in the first twenty minutes, but South Carolina had the edge at 89%-73%.

A 14-6 run gave Florida an eight-point lead with just over five minutes played in the second half. A Devin Robinson And1 brought the Rowdies to their feet.

for the first time since the first half. Allen started out 10-11 from the charity stripe through 32 minutes of play.

Florida took their largest lead of the game at 13 with 5:54 remaining in the contest. That lead came off of two Chris Chiozza free throws, putting him at 10 points on the day. Chiozza has now had five straight games where he has scored in double-digits.

Florida will have three days off before traveling to Lexington to take on the Wildcats for the second time this season. The Gators took down Kentucky, 88-66, in their initial meeting in Gainesville. After the game, Mike White looked ahead to the Kentucky game.

Check out all the highlights from tonight's 88-61 win vs. South Carolina! pic.twitter.com/gmDK27Ri9e