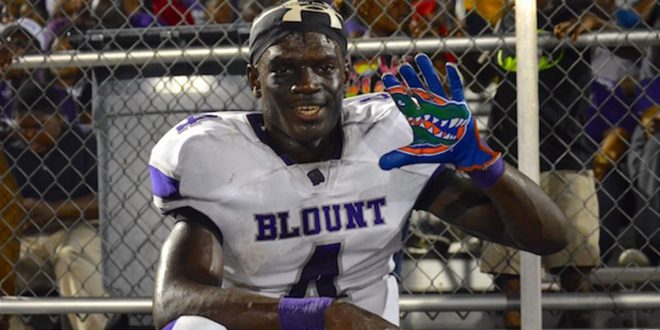 The Florida Gators are preparing to kick off spring practice on Tuesday, February 28th. When they do, some new faces will be on the field. Florida will welcome five mid-year enrollees to the Gator football program, one being Kadarius Toney. Toney is a freshman out of Blount high school in Eight Mile, Alabama. He was highly recruited by Florida and decided to forgo his senior spring and head to Gainesville to prepare for the 2017 college football season. Coach McElwain spoke extremely highly of Toney’s athletic ability. He’s indeed listed as an athlete on the official 2017 Gator Football roster. McElwain says any time the team gets new players such as Kadarius Toney, it is exciting for everyone.

Before Kadarius Toney arrived at Florida, he was recruited by a number of talented teams. He received offers from Alabama, Auburn, Ole Miss, South Carolina and USF. In high school, Toney played quarterback, wide receiver and running back. Coach McElwian made a promise to Tony that he would give him a chance to be the quarterback for the Florida Gators. Coach McElwain said in his press conference that he wants all three quarterbacks fighting for the starting job : Kyle Trask, Feleipe Franks and Kadarius Toney, to take charge.