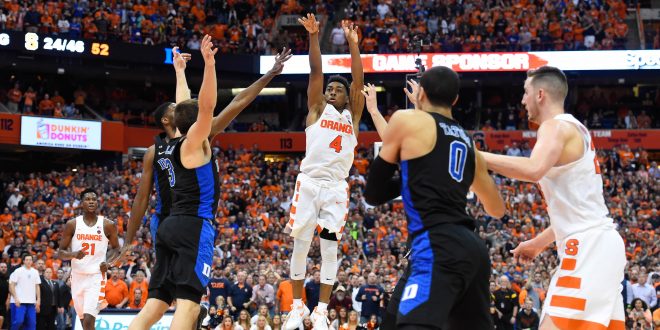 Syracuse finally leaving a statement this season with a 78-75 win against No.10 Duke shows their potential heading into the NCAA tournament. John Gillon’s three-pointer to beat the buzzer and the Blue Devils left a large amount of the 30,331 fans at the Carrier Dome on the court celebrating. National Collegiate Basketball Hall of Fame coaches Jim Boeheim and Mike Krzyzewski are now tied with a 4-4 head-to-head record against each other. The Orange improve to 17-12 overall and 9-7 in the ACC. On the other hand, Duke have their seven game win streak terminated and are now 22-6 overall and 10-5 in the ACC.

Offensive Struggle in First Half

The Orange and Blue Devils were unable to produce offensively for most of this game. The Blue Devils 33-25 halftime lead is thanks to a first half double-double from freshman small forward Jayson Tatum who had 14 points and 10 rebounds. Duke guard Grayson Allen could not replicate being an offensive threat and finished with eight points (2-11 overall and 1-8 from three-point range). Syracuse finished the first half shooting 34 percent and Duke 37 percent.

An Orange Resurgence in Second Half

The Orange were down by eight points to begin the half, but decent shooting and consecutive defensive stops tied the game at 47 with 13:08 left. Grayson Allen and Duke leading scorer Luke Kennard found themselves in foul trouble with four each. The 22 points from the free throw line were a difference maker in the game, especially since Kennard and Allen began cautiously defending to avoid fouling out. Although the Blue Devils dominant display on the glass existed for most of the game, Tyler Landon’s rebound after Kennard’s shot with about eight seconds left led to Gillon’s bank shot for the win.

Although Syracuse is in seventh place in the ACC standings, the strength of arguably college’s toughest conference solidifies their spot within March Madness. Sitting at a 12 seed on Joe Lunardi’s bracketology on ESPN, the Orange can raise their seed if they also manage to upset No. 7 Louisville on the road and get revenge at home against Georgia Tech in their last game. Syracuse made the Final Four in 2016 but eventually fell to fellow ACC team North Carolina.

The Blue Devils are out of reach of the preseason expectations placed upon them, but three tough games to end the season can make the difference on how March Madness will play for them. Duke travel next to Coral Gables to face a young Miami team who handed No. 18 Virginia their fourth straight loss. A final home game against a surprising Florida State squad that beat them 88-72 earlier this season and the second game of the huge rivalry with ACC leaders North Carolina on the road concludes the season.