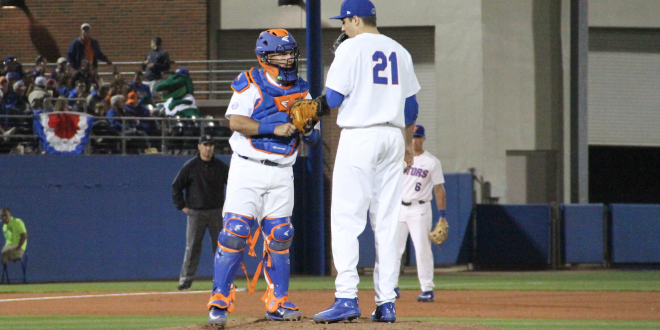 The No. 2 Florida Gator baseball team opened up their big-time series against the No. 17 Miami Hurricanes with a 1-0 win. Alex Faedo carried the Gators to the win with a performance to remember on the mound.

Alex Faedo had a stellar outing. The junior right-hander retired the first 13 batters of the ballgame while striking out four of them. The Hurricanes were off-balance from the start. This performance comes off a less than stellar start for Faedo. Last week against William & Mary, he pitched 4.2 innings and allowed four runs. Tonight was a much different story.

After an error by Dalton Guthrie at shortstop and a walk, coach Kevin O’Sullivan yanked Faedo to bring in Frank Rubio. The senior hurler came in and struck out Romy Gonzalez for the final out of the game. Earlier this week, Rubio came in the ninth against Jacksonville and allowed two hits. The Gators inevitably lost that game.

Florida had opportunities to open this game up but they couldn’t capitalize. In the bottom of the second, Deacon Liput hit a triple to lead off the inning. He was called out at home after breaking to the plate during a dribbler to third. The next inning, Jonathan India would lace a ball to left field that scored Dalton Guthrie and that’s all the Gators would get.

Jesse Lepore of Miami settled in after that third inning. O’Sullivan said after the game that Lepore did a good job of keeping his lineup at bay.

With the win, Kevin O’Sullivan secured his 400th win of his career. He said staff continuity had a lot to do with it but gave all the credit to the players.

“They are the ones that play the game and put in all the hard work. 401 will be a little sweeter.”

Rest of the Weekend

The Gators will be going for the series win tomorrow night against Miami. First pitch is at 6:30 p.m. Brady Singer will face off against Jeb Bargfeldt Jr. on the mound. You can listen to Steve Russell and Jeff Cardozo call the game on 850 AM WRUF.