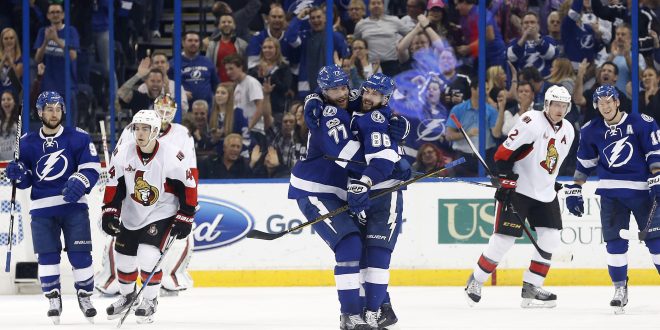 The Senators entered with a 2-1 win over the Panthers and attempted to complete a Florida sweep at the end of a four-game road trip, but fell apart in Lightning territory.

Ottawa started off strong with the opening goal for the 29th time this season. The Senators scored with a two-man advantage just six minutes into the game. Kyle Turris earned his 22nd goal of the season and 300th NHL point after putting one passed Andrei Vasilevskiy, but the game went downhill for the Senators in the second period.

Ottawa goalie Mike Condon let in two goals in a span of 3:58. Brayden Point tied it for the Lightning, burying a slap shot in the second period and Kucherov’s first goal gave Tampa the lead. Lightning center Tyler Johnson says even though Ben Bishop was traded, the team still managed to work together and set up good plays.

Kucherov made it 3-1 when he beat Condon between his feet on pass from Jonathan Drouin. His third goal of the period came from a perfect pass from Victor Hedman. The puck went above Condon’s glove and high to the near post, giving the lightning a 4-1 lead. Each of Kucherov’s goals came on the power play with a shot from the right circle to the left of the net.

Braydon Coburn scored the game-winner for Tampa in the third period.

The Bolts have been desperate for a spot in the playoffs and proved to be a notable team with four unanswered goals on Monday.

Johnson says Vasilevskiy kept them in the game before they were able to break through and put up points on the board.

Vasilevskiy survived in the contest with 39 saves and ended his five-game losing streak with his first win since Jan. 24.

The Lightning will host the Carolina Hurricanes on Wednesday at 7:30 p.m. ET.