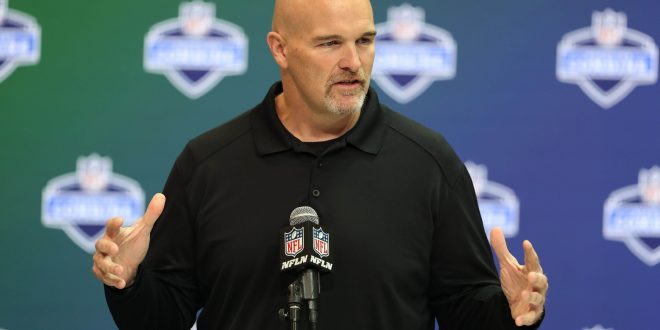 It’s been one month since fans were treated to one of the greatest Super Bowls in NFL history. For Atlanta Falcons head coach Dan Quinn, Super Bowl LI is a memory that will forever burn in the back of his mind. Perhaps that’s not a bad thing. After all, it was Quinn’s third coaching appearance and second Super Bowl loss in just four seasons, a stat line many coaches would love to claim.

How does the saying go? If at first you don’t succeed, try running the ball more when you hold a 28-3 lead?

“I am past it. I am not over it, and I don’t think I ever will be and that’s a good thing,” Quinn said when asked about the legendary loss at the 2017 NFL Combine.

It is a good thing. Whether Atlanta fans realize it or not, this loss could inspire an angry Dan Quinn, and there’s still plenty of time for him to develop as both a head coach and a leader. Quinn may have lost a few battles, but the war is far from over. With a young league MVP at the helm of his high-powered offense, two dynamic running backs, and one of the league’s best receivers, Atlanta is primed to have one of the most dominant offenses in the league next year.

The numbers speak for themselves, and they’re staggering.

Atlanta’s offense led the league with 33.8 points per contest, while Matt Ryan racked up the third-most passing yards per game (295.3). The Falcons boast a well-balanced attack, featuring tailbacks Tevin Coleman and Devonta Freeman, the main contributors to Atlanta’s average of 120.5 rushing yards per game in 2016.

“Both running backs over 10 touchdowns a piece,” Quinn said. “Having two of those guys who can be as effective in the run game and the pass game, that’s something we’re really fired up about.”

In order to do his offense justice, Quinn must spend this offseason focusing on building the Falcons’ 27th-ranked defense.

Quinn explained that growth is Atlanta’s offseason focus. The Falcons, like a boxer, must get off the canvas after being knocked down.

I'm a senior studying Political Science at the University of Florida. Multimedia Sports Reporter for ESPN Gainesville 95.3 and WUFT - Passionate about life, sports, and fitness.
@charliejordanuf
Previous Gator Women’s Basketball Falls in 2nd Round of SEC Tournament to Texas A&M 67-48
Next Former FSU Running Back Dalvin Cook Takes on the NFL Combine