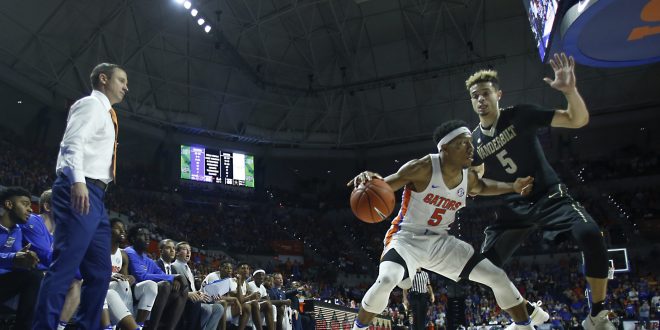 Before the Gators go to the SEC Tournament, first they have to take on Vanderbilt in Nashville, the last regular- season game of the season. The Vanderbilt Commodores beat the Gators at home back in January in a close game, 68 – 66. This was the only home game loss for the Gators. Now, the Gators are looking for redemption while the Commodores are trying to advance to 10 SEC wins. The game starts at two o’clock on Saturday at the Memorial Gymnasium in Nashville Tennessee on ESPN.

Dores and No. 12 Gators tomorrow in Memorial on Senior Day. Be there!
Preview: https://t.co/dSh2diwZOg
Tickets: https://t.co/kCNAnwbM4H pic.twitter.com/jE1L46pIbc

Vanderbilt is looking to bolster its postseason resume by sweeping the season series. The Commodores have played itself into the NCAA conversation with a strong late-season run with one of the toughest schedules in the country. Vanderbilt was won four straight games before losing to Kentucky in Lexington on Tuesday night. A game that they led by 19 points in the first half, only to fall to Rupp Arena runs and too many turnovers. A win over Florida will give Vandy a winning record in league play with two wins over the Gators.

The Commodores started off with a slow start with brand new head coach Bryce Drew. Before playing the Gators in January, the Commodores were 8-10 on a four-game SEC losing streak. The turning point of the season was beating the Gators at home. This game gave the team more confidence moving forward throughout the rest of the season. Now, Vandy is 8-4 in conference play, including a home loss against Arkansas and Ole Miss. Vandy ranks No. 1 in the SEC in 3 point shooting percentage. The Commodores are confident of a home victory after beating Florida in Gainesville. The key for victory is limiting turnovers and making easy shots.

Kornet is one of the toughest match ups in the country. Last week, he became the most prolific 7- footer from the 3- point line in NCAA history. He now has 127  for his career, including 49 this season. He is also great at securing rebounds and a great defensive blocker. LaChance is also known for his three-pointers. He is simply the best in the SEC. LaChance is 58 for 118 overall from distance, good for 49.2 percent. The Gators saw this up close in the first meeting when LaChance went 3 for 4 from the arc for 11 points and five assists for the Commodores resulting in a victory at the O’Connell Center.

This should be a great match up for both teams. Tim Thompson, radio analyst for the Vanderbilt Commodores, said the key for a Commodore victory is to have limited turnovers over the Gators. This was the biggest problem over the recent loss to Kentucky. A win over Florida will give the Commodores 10 wins in the SEC conference, which will set them up for a successful SEC Tournament action.  Thompson said the only way the Commodores will win is if they are laser focused because one slip up like turnovers will cost them the game.   The key for success is to shoot well and limit turnovers, that is how the Commodores beat Florida back in January and its the only way they will beat them on Saturday.

Hello my name is Kaitlin Alexander, a passionate story teller and lover of sports. Fun facts about me: I am a world traveler, interviewed all three UF Heisman Trophy winners, and a former intern of Bleacher Report. Follow me on Twitter: KalexanderUF
@KalexanderUF
Previous The NFL Combine: A Plenty of Fishes To Catch
Next Gators Host Lions in Weekend Series