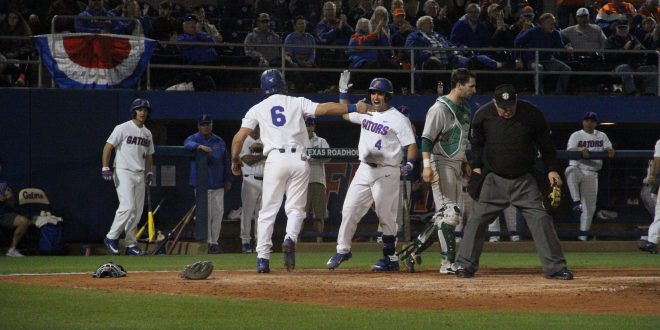 On a cool night at McKethan Stadium in Gainesville, the Gators and Seminoles put on quite a show in their first Sunshine State Showdown in baseball this season.  A crowd of over 5,800 fans witnessed a classic pitcher’s duel with the Gators coming out on top 1-0 to give Florida its eighth win over FSU in their last nine meetings.

But in the Gator seventh, Jonathan India hit a one out double and with two outs, designated hitter Mark Koloszvary’s check swing single to left field plated India with what would turn out to be the only run of the game, saddling Karp with the loss despite striking out 11 in seven innings of work.  For Gator coach Kevin O’Sullivan, he couldn’t help but laugh at how the game goes sometimes.

Florida State held the Gators to only six hits with a combined effort from starter Karp and reliever Chase Haney as the Gators struck out a total of 12 times and yet, the Gators found a way to win, thanks in large part to its freshman arms.  Brown said that the leaders of the team really took charge heading into the rivalry and he’s not worried about the offensive side of their game.

After Brown’s five scoreless innings, Kirby McMullen made a quick appearance for a third of an inning but it was freshman Andrew Baker who really set the ‘Noles back.

The closest FSU came to scoring was in the sixth inning when the lefty Baker entered the game.   With one out, he got Rhett Alpin to fly out and Cal Raleigh to ground out, stranding a runner at third.  Baker then struck out the side in the seventh inning, helping him earn his first win as he tossed 2.2 innings of relief, walking none while striking out four.

Baker said of all the big moments in his baseball career thus far, tonight takes the cake.

Tyler Dyson entered to close out the game in the ninth and retired the side in order. O’Sullivan said getting Dyson in there to close games will be integral to the future of this team.

This win meant much more than just a win over a major rival. O’Sullivan said he didn’t care what the score was as long as they won and the young guys got the experience that they needed.  He trusts that soon enough the bats will come around as the hitters get their timing back and adjusted.

Florida will begin SEC play this weekend with a series at Auburn. 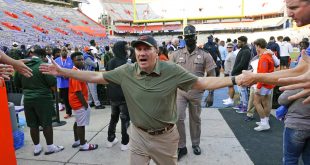