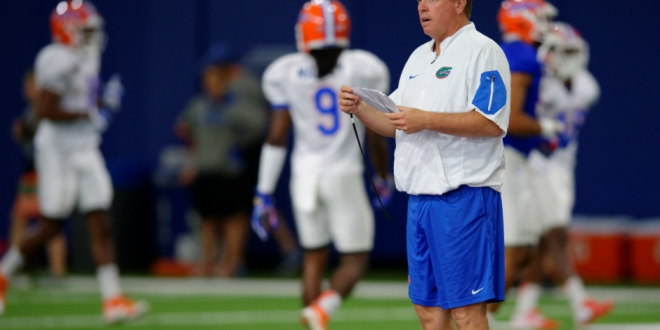 GAINESVILLE, FL – Florida football coach Jim McElwain praised his team for not only listening to the coaches, but going above and beyond of what they asked of them. Before spring break at the University of Florida, McElwain and his assistant coaches asked their team to train somewhat during the break. All over social media there were videos of Gator football players such as Antonio Callaway working out with soon to be quarterback Jake Allen as well as many other players who decided to head to the gym instead of the beach. Coach McElwain says the work ethic of his players  is one of the many reasons why he loves this team and he could not be more proud of what he saw at workouts.

McElwain says he is so proud that his guys continued to work hard and train during spring break,"this is why I'm so excited about this team"

During practice today, it seemed as though the Gators stepped it up a few notches. Everything was more fast paced than the first week of practice. Quarterbacks had no time to waste in between throws, wide receivers ran routes at game speed, defense was playing tighter than ever. This may all be do to the Gators practicing for the last time without any pads, but Coach McElwain wants to think differently. He credits the speed of this team to two things: talent and hard work.

McElwain: "I think that's why I'm so excited about this team. They've really focused in on what they need to do to get better." #Gators

Up next, the Gators will head back to the practice field on Thursday afternoon, this time with shoulder pads on. After Thursday’s practice they will emulate a game day situation by practicing Saturday afternoon in the sun.