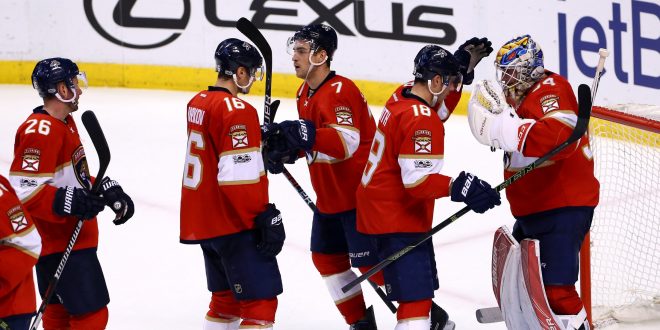 The Florida Panthers had their way Tuesday night as they hosted the Toronto Maple Leafs and won 7-2.

It was a career night for Panthers left wing Thomas Vanek as he had a career-high four assists. Along with Vanek’s contributions, center Jonathan Marchessault scored a game-high two goals. Marchessault now has 22 goals on the season, tying Vincent Trocheck for the team lead. Aleksander Barkov, Keith Yandle, Reilly Smith and Colton Sceviour also scored.

Panthers goalie James Reimer stopped 28 shots and got his first win in eight starts. The Panthers were everything but apprehensive, which Reimer believes was the key to victory.

With the loss, the Maple Leafs dropped a point behind the Tampa Bay Lightning and New York Islanders for the last playoff spot in the Eastern Conference.

The scoring started early and often as Barkov gave the Panthers a 1-0 lead 18 seconds into the contest. The goal was the quickest scored by Florida this season.

Komarov was able to reduce the lead with a goal on a power-play and make the score 2-1.

The Panthers were able to extend the lead again when Marchessault scored from the blue line. That would be the final goal of the first period, and it did not get any better for the Maple Leafs.

Florida scored three more goals in the second period then had a lone goal in the third to top it all off.

Next on The Schedule For the Panthers

The Panthers will make the trek to Columbus, Ohio on Thursday to face-off against the Blue Jackets.

Previous Vanderbilt vs. Northwestern NCAA preview: What You Need to Know
Next NCAA Tournament Underway