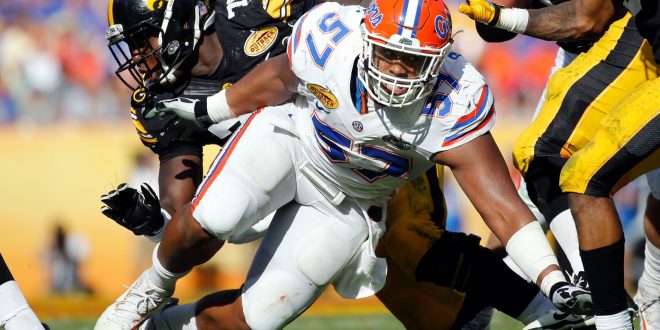 For Gator defensive tackle Caleb Brantley, performing in Pro Day has been a dream of his for a long time.

Early Tuesday morning, Brantley tweeted a picture of himself when he was a little boy holding a football.

“It just shows you I’ve been working for this my whole life and I still can’t believe it,” Brantley said.

“We’ve been doing this our whole life, so you just got to go out there and do what you do,” Brantley said.

Brantley’s projection in the draft varies per report or news outlet. In an article published by CBS Sports, he was rated no. 43 overall and as the third-best defensive tackle in the 2017 NFL Draft.

Brantley said he received positive feedback on Pro Day and that it was a great feeling to be out there with his teammates and to get loose.

“They think I am using my hands very well, they think I’m very explosive and I’m smart,” Brantley said. “I have high football I.Q. It’s a lot of positives. I just got to work on my effort.”

Scouts reported that Brantley plays with passion and hunger. Also, Brantley possesses a compact frame with lean muscle in his arms and legs.

Although Brantley received praise for his performance on Pro Day, he was not shy about reflecting on what he still needs to improve on after last season.

Among the list of weaknesses that Brantley possesses, Scouts observed that he might need to add more body mass onto his frame.

However, Brantley said that going through this process and talking with people has helped him mature and realize things.

“You just got to get your body right and train,” Brantley said.