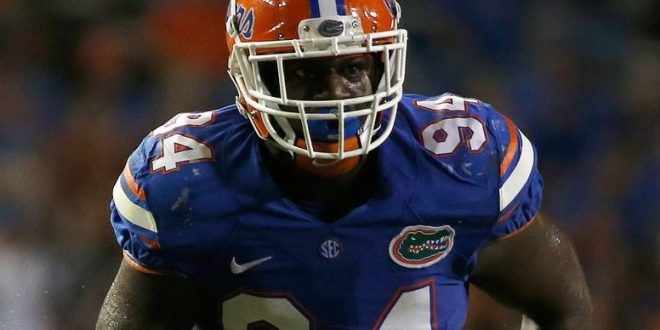 It’s an exciting time for college athletes as Pro Days are officially underway. Pro Days are very important as they showcase NFL draft-eligible players’ abilities and skills. Will these skills translate to success on the field? That decision is up to the scouts. Bryan Cox Jr., former defensive end for the Gators, participated in the Pro Day event. Many scouts probably referenced Cox’s combine results. Cox’s combine results were solid. On the 40-yard dash Cox ran for 4.90 seconds. Cox was able to get 16 reps on the 225 bench press, a 26 1/2 on the vertical jump, a 09’01” and a 3.77 on the 3-cone drill.

Bryan Cox talked about what he brings to the table during Pro Day:

Cox was a force for the Gators defensive line in 2015, setting career highs in tackles, sacks and forced fumbles. His productivity was limited in the 2016 season due to injuries. Bryan Cox Jr. stands at 6’3” and weighs 265 pounds. Cox Jr. finished his career at Florida with 99 tackles (solo and assisted), 20.5 tackles for a loss, 10 sacks and 3 forced fumbles. Cox Jr. has the benefit from possessing natural upper-body strength, which assists in setting a strong edge and constricting his gap against the run.

During Pro Day players go through a series of interviews. Cox Jr. talks about one of the weirdest interview questions:

Cox Jr. happens to be the son of 3-time NFL Pro Bowler Bryan Cox, so Jr. has a lot to live up to but he definitely possesses the drive to succeed at the next level. Cox is currently projected to be drafted in the later rounds of the NFL Draft.