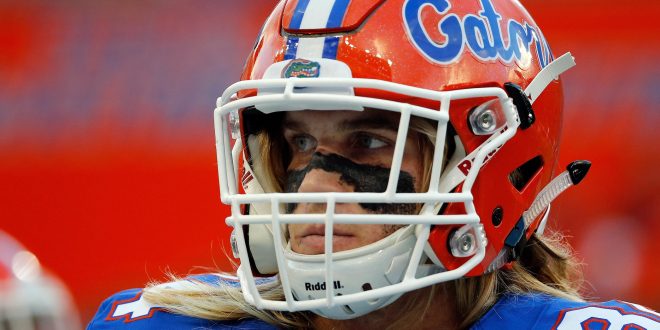 Florida Gator Alex Anzalone is a talented linebacker whose desired size and athleticism will help him fit into any defensive position in the NFL. Defensive coordinators need linebackers who cover a lot of ground and can drop quickly downfield. Anzalone has shown that he is capable to keep up with receivers and is a good pass-coverage linebacker.

Anzalone fully committed himself to the Gator nation as one of Will Muschamp’s best linebackers in the class of 2013.

The decision of becoming a Gator four years ago was the best decision of my life. Make the best choice for you! #NSD17 #GatorsAlways pic.twitter.com/TD6vEcmvL0

In 2015, Anzalone played in the first two games before suffering a shoulder injury that sidelined him for the rest of the season.

During the season, he registered six tackles, and had a career-high five tackles against New Mexico State.

As for 2016, he was declared for the NFL draft after his redshirt junior season. But, another injury had him only playing the first eight games of the season.

He ranked third on the team with 53 tackles.

His stats for the this season include three sacks, six quarterback hurries, two pass breakups and one fumble recovery.

Florida’s annual pro day took place Tuesday as the NFL scouting community came to Gainesville to evaluate the 21 Gators planning to participate. For Anzalone, he says pro day was a great opportunity to show off his skills.

Anzalone worked solely on position drills throughout the day and says it was hard but was able to show off his skills.

Throughout the process, he’s been able to form relationships with some of the NFL coaches and says a lot of teams can see him as an inside or outside guy depending on what they’re looking for.

No matter how he feels about Pro Day he knows the draft can go either way. For now, he says he was glad to be back in the Swamp for the day.

Turning dreams into a reality pic.twitter.com/fU9rSrUM5I