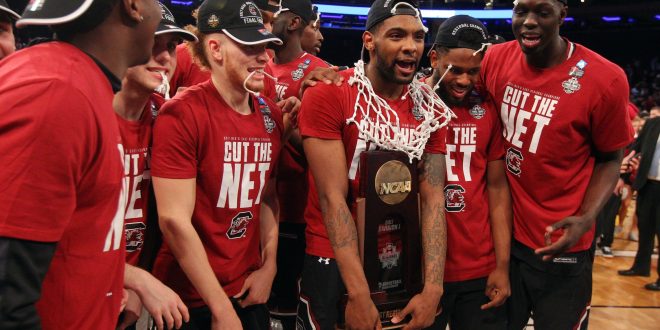 The SEC, a conference that was disrespected by “experts” around the country, really shined in the month of March.

South Carolina stunned the nation with their second round victory over two-seeded Duke. Then the fun really started, as the Gamecocks knocked off three-seed Baylor and fourth seeded Florida before losing to Gonzaga 77-73 on Saturday night in the Final Four.

The conference that was really only “supposed” to have one championship contender, Kentucky, ended up sending three to the Elite Eight.

Kentucky, a two seed, took No.1 North Carolina to the buzzer before falling 75-73.Wildcats head coach John Calipari spoke about how young the conference is, and how many teams in the top 100 the SEC boasts.

His optimism isn’t without backing, as the Southeastern Conference sent five teams to the Big Dance, but was fifth among the conferences (ACC, Big 10, Big 12, Big East).However, when you take a closer look at how each conference fared, the SEC had the second best winning percentage (.688) of any conference in the tournament that had more than two teams. Only the Pac-12 was more successful (.714). Taking a peek at the recruits headed to SEC schools next season, 11 of the top 50 (according to ESPN’s rankings) are headed to SEC teams.

Granted, most of those top recruits are going to Kentucky, who plan to bring in four of the top 25. However, Alabama has done a great job recruiting and have signed two of the top 25 recruits.

Florida has signed the 59th and 64th recruits, Isaiah Stokes (C) and DeAundrae Ballard (SG). Florida, Arkansas, South Carolina, Ole Miss, Georgia, and Vanderbilt all will return at least two of their top three scorers from this season.

Looking ahead, South Carolina’s vocal head coach Frank Martin spoke about the importance of experience, and how those who made it this year will be even more prepared come the 2017-2018 season.

Coach @FrankMartin_SC post-game: "I'm so proud of these guys." pic.twitter.com/yWRJ13uA6q

It will be interesting to see how South Carolina follows their Final Four appearance without star player Sindarius Thornwell, who averaged 23.6 points per game in the NCAA Tournament.