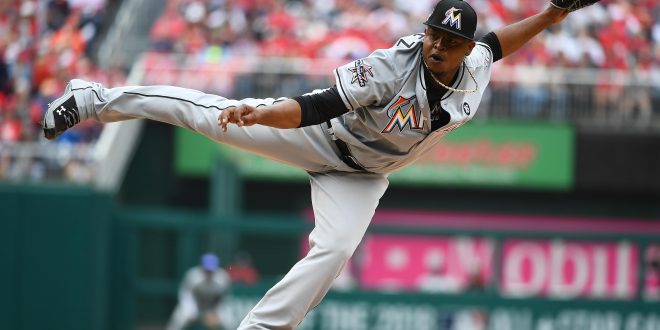 The Miami Marlins went into Monday’s Opening Day game against the Washington Nationals with a strong, revamped bullpen, but it turned out to be a flop at Nationals Park.

The Marlins watched their lead slip away after reliever David Phelps gave up two home runs in the 4-2 loss to the Nationals.

Miami got off to a strong start with Edinson Volquez, who made his fifth career opening day start. Volquez, who signed a two-year $22 million deal in the offseason, was brought in to stabilize the Marlins’ rotation following the tragic death of Jose Fernandez. Volquez pitched five scoreless innings and the Marlins offense had the advantage.

The first half of the game looked good for Miami. It took a two-run lead in the fourth when Giancarlo Stanton doubled to center to score J.T. Realmuto and Marcell Ozuna followed with an RBI single to score Stanton. Volquez was impressive in the matchup, striking out six batters, including the heart of the Nationals’ swinging lineup, Bryce Harper, Daniel Murphy and Ryan Zimmerman.

Volquez, who finished with 82 pitches before being lifted, said he could have stayed in longer.

Miami manager Don Mattingly put Phelps in for Volquez and that’s when things backfired for the Marlins.

Harper sent a solo shot to center to get the Nationals on the board in the sixth inning. Phelps was one out away from a perfect inning in the seventh, but surrendered a go-ahead, two-run shot to pinch hitter Adam Lind.

Phelps says he thought he was prepared to take on Lind, but he will be ready to go next time.

Washington added a run in the eighth inning off right-hander Junichi Tazawa, who allowed all three of his batters to reach base. Brad Ziegler relieved Tazawa with a strikeout and double play.

Phelps, a righty, faced lefty batters Harper and Lind. The Marlins do not have any left-handed relievers, which could have contributed to the design flaw in Miami’s bullpen. With no lefty to turn to, Mattingly kept Phelps in and suffered the consequences.

Mattingly says he isn’t worried about Phelps’ performance and knows he will bounce back.

The Marlins will have an off day on Tuesday. They will face the Nationals in Washington again on Wednesday. Right handed pitcher Dan Straily will be on the mound for Miami. The first pitch is set for 7:05 p.m.