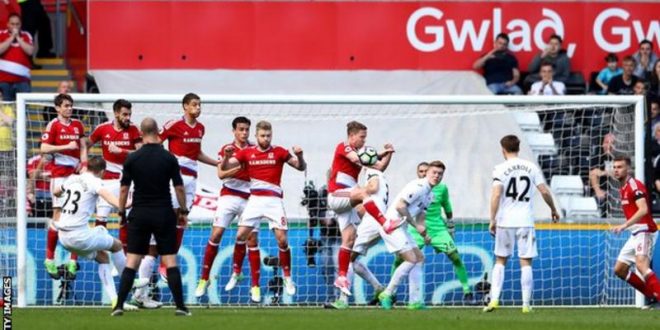 Battle for safety ends in stalemate

Swansea and Middlesbrough’s hunt for Premier League safety brought the two sides face-to-face at the Liberty Stadium and ended in a dull 0-0. On paper, this was the expected result of the game with 17th placed Swansea having the worst defensive record in the league and 19th placed Middlesbrough having the worst attacking record. 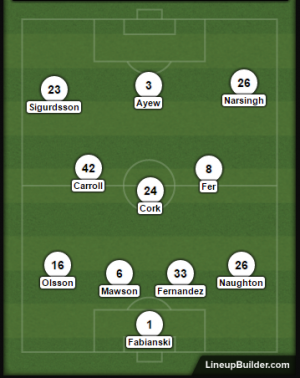 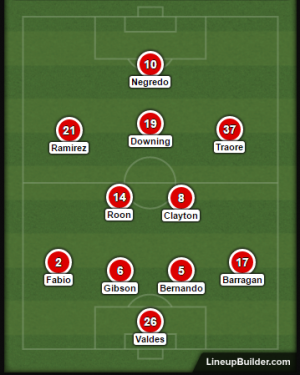 The game started out as a back and forth affair for the first 15 minutes with both teams generating chances.

In the seventh minute, Tom Carroll played a perfectly timed lofted through ball over the Middlesbrough defense to the overlapping full-back Martin Olsson. The left-back burst into the box, cut inside and shot but his right-footed attempt was way over.

Three minutes later, Victor Valdes kept Middlesbrough in the game after a great run from Andre Ayew. The Frenchman ran down the left wing unchallenged from Swansea’s half and cut inside and curled a shot in from outside the box which Valdes saved high to his right.

In the 13th minute, Middlesbrough had their best chance of the half through Negredo and Downing. Ramirez used his skill to get past Naughton on the right before drilling in a low cross to Negredo but his shot was blocked by Mawson. The ball went out wide to Traore who sent it back into Downing but his shot from inside the box was blocked by Fernandez.

Adama Traore was a constant problem to Swansea’s left flank and would frequently tear through the midfield. His dribbling was probably the only thing giving Middlesbrough a semblance of attack this half and Swansea decided to try to bully him out of the game with persistent fouling. Leroy Fer picked up a booking after hacking down Traore during a run where he beat three other Swansea players.

The game settled into the slow pace it would stay at for the rest of the match with Swansea being dominant but both teams struggling to create any kind of decent chance. In the 32nd minute, Gaston Ramirez had the most noteworthy incident of the match when he hurt his ankle in a collision with Narsingh. He initially carried on but was replaced by Gestede in the 38th minute. They ended up changing formation to a 4-4-2 with Downing moving out wide while Gestede played as a striker.

Tom Carroll was unlucky not to give Swansea a lead when his left-footed rocket from outside the box just missed the post.

If the first half was Swansea’s attack versus Traore’s dribbling, the second half was purely Sigurdsson vs Middlesbrough. The half had even less action than the first half but the Icelander was unlucky to not play a part in a goal being scored.

He hit the ground running with a good shot from an unmarked position in the 48th minute but it was straight to Valdes.

Traore was back in the thick of things 5 minutes later as he ran past the Swansea defense into a tight angle and tried a shot with his right foot but the ball went harmlessly past the post. His dribbling and speed were causing all sorts of problems for Swansea as he helped set up one of Middlesbrough’s only chances of the half in the 57th minute. He crossed the ball in from the right for Clayton at the far post who tried to head it downward for Negredo to finish but his header was off.

The game then settled into a trend of Middlesbrough sitting back with the ball primarily in their half and Gylfi Sigurdsson using his set pieces and shooting to try to force a breakthrough. He was unlucky not to score with a curling effort from outside the box in the 64th minute but Valdes’ diving save up to his left kept the game goalless.

The game got more and more physical as Middlesbrough would disrupt Swansea attacks with tactical fouls. Negredo and Gestede picked up bookings in the 69th and 79th minute respectively.

The best chances for each team occurred in the closing minutes of the match. In the 89th minute, Andre Ayew managed to burst through the Middlesbrough defense and managed to draw the keeper out into a 1-on-1 position. He tried to round the keeper but his touches were too heavy and the chance was wasted.

In the 93rd minute, a pass from Clayton found Negredo on the right side of the field deep into Swansea’s half. The Spaniard took a few touches before lifting the ball toward Gestede at the far post with the outside of his boot. The Frenchman’s positioning and timing of the jump was spot on as he had a free header but his glancing effort was wide of the post in the biggest waste of the match.

Themes of the game:

Sigurdsson was played as a left winger but his experience and expertise lies in playing directly behind the striker. This would result in Sigurdsson moving more central when Swansea were in position. This freed up that flank for Traore to run wide as he is wont to do and is what made the first half so level and back-and-forth. Traore had seven dribbles in the first half and was clearly the best player in the first half.

After Ramirez’s injury and substitution, the second half was entirely in Swansea’s favor with Sigurdsson playing a big part due to the added space in the middle. He took 6 of their eight shots in the second half and finished withthird-most most touches for their team behind Naughton and Olsson. However, fabulous keeping from Valdes prevented him from scoring on a number of occasions.

Gaston Ramirez and Stewart Downing are interesting players in their versatility to play across the field in any position behind the striker. At the start of the game, Downing played directly behind Negredo while Ramirez was out wide but the latter got injured toward the end of the half and was replaced by Rudy Gestede. Gestede is an out and out striker and as a result the formation switched to a 4-4-2, taking Downing out of the center.

This is what led to Swansea’s second half domination as Sigurdsson finally had more room in the middle. Traore wasn’t as free on the right as he had defensive duties as well as part of the 4-4-2.

Man of the Match:

The former Barcelona keeper was in prime form and was the difference between a draw and a loss for Middlesbrough. He totally made 10 saves, including 3 punches and 4 claims, and made the second most passes for the team.

Journalism Student at UF with a passion for statistical and tactical analyses of soccer.
Previous Gator Football Making Progress On Both Sides of the Ball
Next Marlins New ‘Pen Can’t Hang Onto Lead On Opening Day