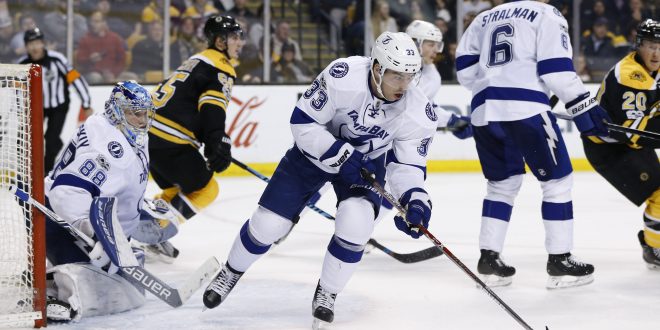 The Tampa Bay Lightning’s hopes of making it to the playoffs are growing slimmer by the minute. After losing 4-0 to the Boston Bruins last night, Tampa Bay is all but officially eliminated from playoff contention.

As if the loss wasn’t enough for the Lightning, rookie Jake Dotchin was speared between the legs by left wing Brad Marchand. With 40 seconds left in the first period Marchand was ejected for the low blow. This isn’t the first time the player has been suspended due to his physical actions. Marchand pulled a similar move in 2015 and has been previously suspended four times and could face another suspension.

Shortly after, the Bruins scored on goals by Drew Stafford and Zdeno Chara to make the score 3-0. David Pastrnack finished the game with an empty-netter to close out the scoring for the Bruins.

Boston goalie Tuuka Rask got the shutout in net, stopping 28 shots; with the win the Bruins clinch a playoff spot as well.

Lightning head coach Jon Cooper believes that the better team won. The team knew going into the game that their hopes of making the playoffs although not impossible, were going to be a tough hill to climb.

This is Boston’s sixth straight win, and it will give the Bruins a playoff spot for the first time since 2014, when they lost in seven games to Montreal in the conference semifinals. This win also keeps Boston in the running to finish second or third in the Atlantic Division.

Tampa Bay must win its final three games in order to keep their playoff dreams alive. Beginning in Toronto on Thursday, the Lightning take on the Maple Leafs.