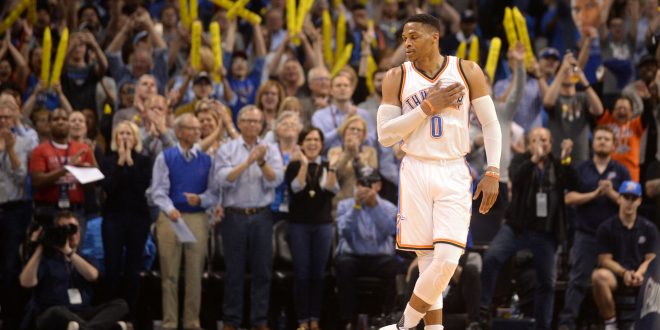 Yet Westbrook still produces his 41st triple double on the year, giving him one in at least half of the games he’s played in during the 2016-2017 season. It marked his seventh straight and tied him with NBA legend Oscar Robertson for the most triple doubles in a season.

The UCLA product still has five more chances break that mark, starting with a Wednesday night match up on the road against the Memphis Grizzlies.

At the end of the game, Westbrook embraced chants from fans screaming “MVP” all throughout Chesapeake Energy Arena. Westbrook said he’s just happy that he can continue performing at a high level.

A hotly debated MVP race has many questioning who has the edge as the regular season winds to a halt. Westbrook is averaging a triple double a contest at 31.6 points, 10.7 rebounds and 10.4 assists and only needs 16 more assists to assure that he keeps the triple-double average status.

While all of those stats are impressive, the most under looked is Westbrook’s rebounding rate. Standing at 6’3″ the point guard utilizes pure willpower and athleticism to consistently bring down the rock on the offensive and defensive glass. The second best rebounding point guard – Patrick Beverly – averages only a little more than half Westbrook’s mark at 5.7.

But Westbrook’s only knock is his team’s positioning. The Thunder sit as the sixth seed in the Western Conference, as opposed to the team of the other MVP frontrunner, James Harden, who has pushed his Rockets to the third seed. Houston is expected to be a title contender when the playoffs roll around in just a few weeks.

Of course, there’s an argument for both players. Some will say that the record of the team should be a drastic factor on who gets the award, while others say that Harden clearly has more help with shooters galore and strong role players.

There is a strong possibility that a match up between the two stat goliaths can help solve the debate, but that won’t be until the race for the regular season has already been decided.

Either way, Westbrook’s accomplishments will not go unnoticed. The 28-year-old UCLA product has put the entire league on notice with his consistently dominating performances.

At 44-33, the Thunder are still vying for playoff seeding and nothing is for certain with just a little over a week left in the season. The team can drop down to the seventh seed if it struggles or can climb to the fifth seed with some strong play and good fortune.

OKC travels to Memphis Wednesday night for clash between the sixth and seventh seeds; the line for that game is even.