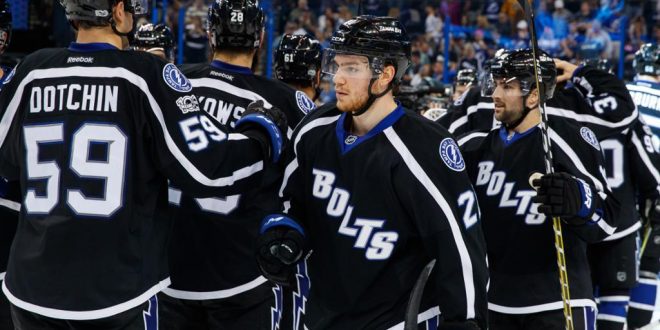 The Tampa Bay Lightning came up short in making it to the Stanley Cup playoffs this season. The Lightning were battling it out with the New York Islanders and Toronto Maple Leafs for one last playoff spot. Heading into the game on April 7, the Lightning knew they needed a win against the Montreal Canadiens to keep their playoff chances alive. A 4-1 win against Montreal is just what they got, keeping them in the running for the final wild card. Despite clinching this big win, as well as another against Buffalo two days later, the Lightning needed more than just their own games to go their way. For the first time since 2013, Tampa Bay will not be seeing any postseason action.

Cooper: "It was a hell of a run we made. 94 points will get you in most other years… But there were eight other teams who did better."

The Lightning ended their 2016-17 season with a 42-30-10 overall record. Injuries contributed greatly to the Lightning falling short of making the playoffs this season. Captain Steven Stamkos suffered a major knee injury back in November. Not wanting to be a liability for himself or his team, Stamkos said he’d be back on the ice only once he felt 100%. Although he desperately hoped to return by the end of the regular season, he had not fully recovered.

On Feb. 3 of their season, Tampa was last in the Eastern Conference. Since then, they went 20-6-4, immensely improving their progressive performance. The team made a turnaround and kept themselves relevant in playoff talk until the very end. The Lightning ended their season on a positive note with a 4-2 victory over the Buffalo Sabres. Finishing off the season strong with three straight wins, Tampa Bay stands 5th in the Atlantic Division.

Future of the Lightning

Barry Melrose, Canadian-American broadcaster for the NHL, describes the future of the Tamba Bay Lightning as “very bright.” Despite a plethora of injuries and other hardships, they still found a way to nearly make it to the playoffs. With many talented players in their 20s in the lineup, the team has potential for success next season. Melrose expects big things from right wing Nikita Kucherov, center Tyler Johnson, and defenseman Victor Hedman, who he describes as “one of the best defenseman in the NHL.” Additionally, Rookie Brayden Point scored two goals in the final game of the season against Buffalo, earning his 18th goal of the season. The youth in the Lightning roster give the team room for growth. Looking far ahead to the playoffs next year, the Lightning are foreseen as a team that can do some damage.

Previous A Whirlwind of Emotions for the Chicago Cubs
Next Premier League Recap: Crystal Palace Beat Down Arsenal, Tottenham Continue Run of Form