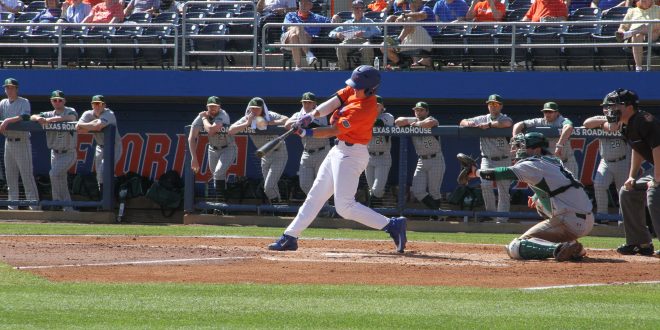 The Florida Gator Baseball team will head to Tallahassee tonight for the final game of their three-game season series with Florida State. The Gators took the first two meetings this season with the Seminoles winning 1-0 in Gainesville on March 14 and 4-1 in Jacksonville on March 28. Freshman Tyler Dyson will make his first career start for the Gators tonight. Going into this game he has 10 appearances and has thrown seven scoreless innings.

RHP Tyler Dyson (1-0, 3.55 ERA) will face off against Seminoles RHP Andrew Karp (0-2, 4.84 ERA). Florida is coming off a series loss to Tennessee this weekend but looking to build off their win on Sunday. The Gators are looking for the regular season sweep over FSU tonight and they have already had more one-run games this season then all of last year combined. Head Coach Kevin O’Sullivan says the they are 6-6 in SEC play and four loses are by one run, there isn’t a whole lot of margin for error.

FSU leads the overall series with Florida 128-114-1. Florida leads with the most wins in Gainesville but the Seminoles hold the lead in Tallahassee 69-42-1. Last season the Gators were 5-1 over the Seminoles sweeping the regular season and going 2-1 in the Gainesville Super Regional.

First pitch from Dick Howser Stadium in Tallahassee is set for 6 p.m.