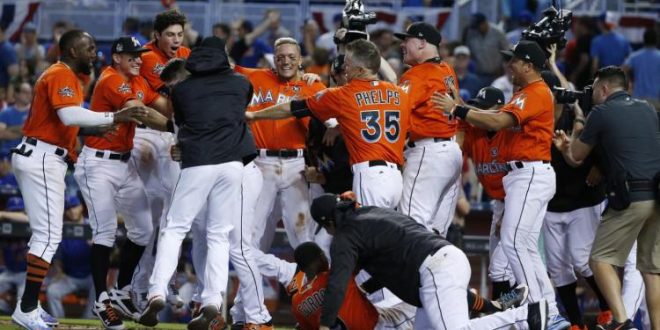 The Miami Marlins Walk Off Twice in Three Days

MIAMI – Miami Marlins shortstop JT Riddle made his second hit in the major leagues count, to say the least. The rookie launched a line drive into the right field stands with two outs in the ninth inning for a two-run homer and the go ahead win, beating the New York Mets 4-2. The hit sent Marlins Park into a uproar of cheering. It was shocking that a rookie could hit a walk off home run his second game in the MLB. Riddle says the home run is something every young baseball player dreams of once they make it to the MLB.

Riddle’s home run was not the only thing Marlins fans were talking about after the win. Up until the eight inning it looked like starter Dan Straily and the three relievers after him were going to combine efforts to complete a no hitter. However, Mets Neil Walker had other plans. With two outs in the eighth inning, Walker singled to break up the no-hitter. The Marlins won the final three games out of the four game series.

BUCKLE UP BABY, THE MARLINS ARE HEADING TO SEATTLE HAVING TAKEN 3 OF 4 AGAINST THE METS! pic.twitter.com/sXFlV39alw

After clinching the series against the New York Mets, the Marlins will now prepare to head to Seattle to face the Mariners in a three-game series. Marlins manager Don Mattingly says himself and his team are excited to start this series after beating the Mets, they want to keep the winning momentum moving forward.