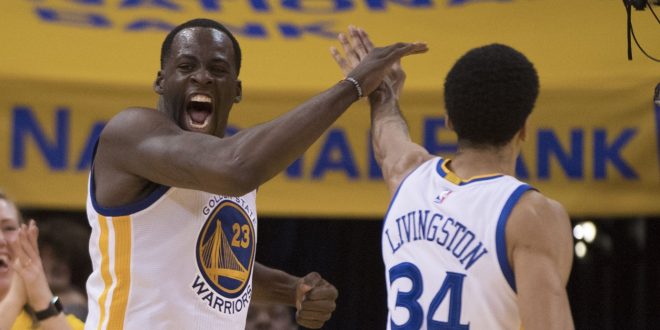 April 16, 2017; Oakland, CA, USA; Golden State Warriors forward Draymond Green (23) celebrates with guard Shaun Livingston (34) against the Portland Trail Blazers during the fourth quarter in game one of the first round of the 2017 NBA Playoffs at Oracle Arena. The Warriors defeated the Trail Blazers 121-109. Mandatory Credit: Kyle Terada-USA TODAY Sports

Warriors Top Blazers in Game One

Heading into the post-season, the Golden State Warriors have been pegged as the heavy favorite to take home the Larry O’Brien Trophy come June. With an NBA-leading 67-15 regular season record, the Warriors would enter the playoffs as the top seed in the Western Conference. Meanwhile, their first round counterpart, Portland Trail Blazers, would secure the No. 8 seed in the west after a 41-41 regular season record. With star players on both sides, the series will certainly be entertaining; and game one was no exception.

Most of the game would be a back-and-forth battle. Blazers guards Damian Lillard and CJ McCollum would steal the show in the first half. The dynamic duo would combine to erupt for 48 points.

McCollum, Lillard combine for 48 points in blazing 1st half vs. Warriors https://t.co/MYdeSFyYdt pic.twitter.com/Ib6LAr6lQx

The game would be tied at 56 heading into halftime.

The score would remain close through the end of the third quarter, tied at 88. Yet, the Warriors would take over in the fourth. Despite a late comeback effort from Portland, Golden State would pull away to claim a 121-109 victory.

The Warriors would get major help from their star players. Forward Kevin Durant would explode for 32 points and 10 rebounds in his first playoff game with the team. Meanwhile, reigning MVP guard Stephen Curry would add on 29 points, five rebounds and four assists. Yet, perhaps the best performance for Golden State came from forward Draymond Green.

Green would dominate on both sides of the floor. He would put up 19 points, 12 rebounds and nine assists, while also adding on five blocks and three steals.

Though dropping the game, the Blazers would get big-time play from their stars. Damian Lillard would end the game with 34 points, five rebounds and three assists. Meanwhile, CJ McCollum would score a playoff career-high of 41 points, while also adding on eight rebounds.

Game two will take place on Wednesday night at Oracle Arena. Tip-off is set for 10:30 p.m. ET and will be aired on TNT.

Matthew is currently a senior, majoring in telecommunications with a minor in business administration.
@matt_levay
Previous Wizards Defeat Hawks Behind Huge Night From Wall
Next Oklahoma City Thunder Gets Blown Out In the Playoffs 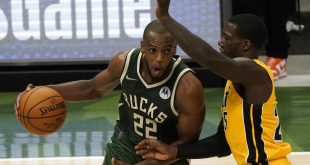