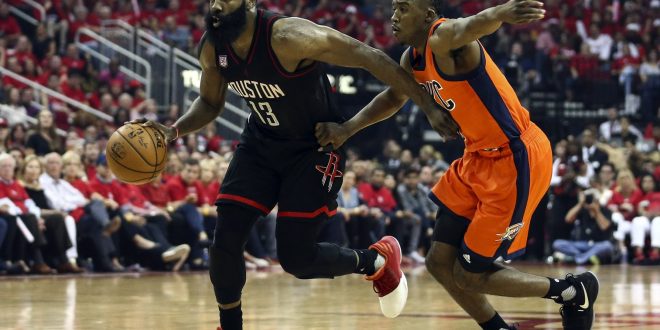 Oklahoma City Thunder Gets Blown Out In the Playoffs

Sunday night the Oklahoma City Thunder faced the Houston Rockets for game one of their seven-game playoff series. The Rockets completely took over and defeated the Thunder 118-87.

James Harden led his Rockets to this 118-87 win, finishing the game with 37 points on 13-of-28 shooting, nine assists, and seven rebounds. The Rockets went into the half only with a five point lead. But by midway through the third quarter, they began to run away with the game. Patrick Beverley was one of the keys to the Rockets’ victory. He finished the game with a postseason career-high of 21 points and 10 rebounds. On top of that, he hit a pair of corner three pointers to add to Houston’s 25-12 run to close out the third quarter.

For the Thunder, Russell Westbrook and Victor Oladipo failed to deliver. Westbrook finished with 22 points, 11 rebounds, and seven assists, but shot just six-for-23 from the field and had nine turnovers. He didn’t have much help from his teammates, as shooting guard Oladipo made just one of his 12 shot attempts, finishing with 6 points. In the frontcourt, the Thunder was also dominated on the boards; Steven Adams and Taj Gibson has just six and five points. A player who shined for the Thunder Sunday night was defensive specialist Andre Roberson. He scored 18 points to reach a new Playoff scoring high, and was one point shy of his career-high.

After leading the NBA this season in points on the paint, Oklahoma City fell to Houston, 62-38 down low. The Thunder also entered the postseason as the No. 1 rebounding team in the NBA, but were out-rebounded 56-41.

On Wednesday at 8 pm, Oklahoma City and Houston will meet for game two of their series. Thunder has been down in the Playoffs before, they were in a very similar position last post-season against the San Antonio Spurs. Although Houston is a strong and tough opponent for any team, the Thunder should be able to make the necessary adjustments and adhere to to Rockets’ strengths.