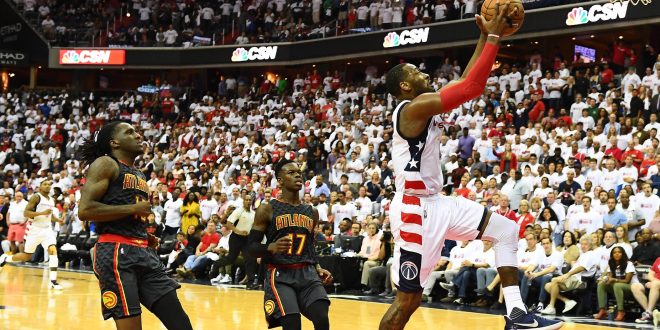 The last time the Wizards hosted the first game of a playoff series, they were the Washington Bullets.

Fast forward 38 years and not much has changed, besides a few faces.

One of those faces being John Wall. Behind a huge night from Wall, the Wizards knocked off the Hawks in an ugly 114-107 victory.

After missing the playoffs last season, John Wall made sure to make the most of his first playoff game since 2015.

Wall became the third player in franchise history, joining Gilbert Arenas and Archie Clark, to have 30 points and 10 assists in a playoff game.

Wall dropped 32 points, shooting 12 of 24 from the field. Wall also dished out 14 assists to go along with his stellar shooting performance.

John Wall wasn’t the only player to have a big night for the Wizards.

All five of the Wizards’ starters had double figures, scoring 99 of their 114 points. Former Gator Bradley Beal had 22, Markieff Morris had 21, Marcin Gortat had 14 and Otto Porter finished with 10.

Not only did the Wizards have a solid night offensively, they also played stifling defense. The Hawks shot just 43.6 percent from the field and went 7-25 from the perimeter.

The only real bright spot for Atlanta’s offense was Dennis Schroder. Schroder had 25 points on 8 of 16 shooting, 9 assists and 3 rebounds.

Paul Millsap also had 19 points, but it was just not enough to carry the load for the Hawks.

Ugly Play Across The Board

Despite the Wizards’ starters putting up pretty good offensive numbers, it was a pretty ugly game from both teams.

The Wizards and Hawks combined for 47 fouls and 31 turnovers in Sunday’s game.

Whether it was first game jitters or the early 1 p.m. tip, both teams will look to clean up their act in preparation for game two.

The Wizards and Hawks have a couple days off before playing again on Wednesday in D.C.

The Hawks will look to clean up their act and tie the series up before heading home for games three and four of the series.

That is much easier said than done with the way John Wall and the Wizards looked on Sunday.

Wall and the Wizards will look to keep their foot on the gas pedal and avenge their 2015 second round playoff loss to the Hawks.