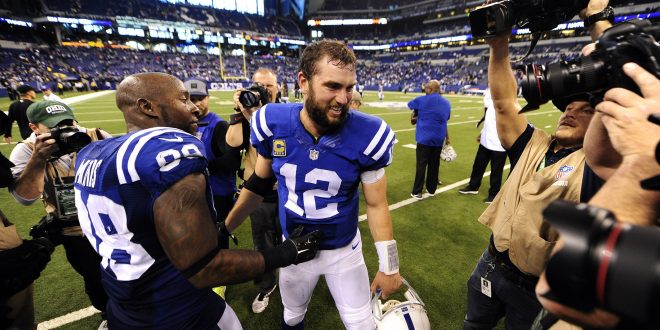 On January 19, 2017, after playing almost a year and a half with a lingering shoulder injury, Andrew Luck decided to have surgery on the arm that many fans and media alike believed were holding the Colts back from sustained success. In 2015, Andrew Luck suffered that shoulder injury and only played seven games that season, the fewest of any of his five seasons in the NFL. Luck has played in 16 games in every other season besides 2015, but the injury didn’t hold him back in 2016.

Andrew Luck threw for career highs in completion percentage (63.5%), average yards per attempt (7.78) and QBR (71.2) in his 2016 campaign. He also lost just three times fumbles last season, the fewest fumbles lost of any 16-game season he’s played. Before the start of the 2016 season, Luck was going through simple rehab to help combat the bum shoulder, but suffered a concussion, elbow, thumb and ankle injuries in the ensuing season, which overshadowed the shoulder injury. After downplaying the injury all season, Andrew Luck elected to have surgery on the shoulder on January 19, 2017.

Luck, in a press conference on April 17 2017, discussed when the injury occurred and that it was his decision to have surgery on the shoulder. He also added that there’s no timetable on his recovery.

Andrew recovering from successful outpatient surgery to fix right shoulder injury that had lingered since 2015. Will be ready for season!

While the shoulder injury will entail a long and arduous recovery, Andrew Luck is coming off of arguably his second-best season in the NFL. The sixth-year starter threw more touchdown passes in 2016 than in any other season besides 2014, when he tossed the most in the entire league.

Per CBSSports.com’s metrics, the Colts also have the easiest strength of schedule in the 2017-2018 NFL season. Outside of their division, Indianapolis will face off against Cleveland, Pittsburgh, Denver, San Francisco and Arizona at home and Baltimore, Cincinnati, Baltimore, Seattle and L.A. on the road.

In addition to their schedule, the Colts have added WR Kamar Aiken to bolster their wide receiver core and will look to improve their offense throughout the NFL Draft on April 27. Indianapolis will need to improve their offensive line next season to better protect Andrew Luck. Per PFF, the Colts had the 25th ranked offensive line in the league last season and gave up the 5th most sacks in the NFL.

Numbers show a slight decline in that span pic.twitter.com/guJ0XVCtrh