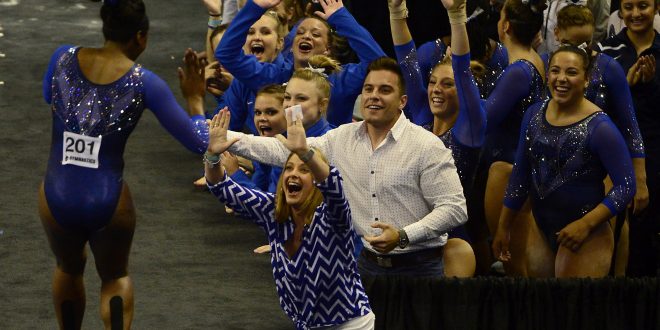 You can’t win them all. It’s a fact that Florida Gymnastics head coach Jenny Rowland and her team know to be true after their weekend in St. Louis. The Gators placed third in the NCAA Gymnastics tournament this weekend. Florida finished behind LSU, who fell short of the championship to the back-to-back champions Oklahoma Sooners.

So, no the Gators didn’t win the NCAA Championship.

To Jenny Rowland, though, her Gators are winners. With this year’s Gators, winning didn’t result in a trophy, but in their performance.

The Florida Gators won in regards to their team camaraderie and how they performed, aspects that Rowland says make this season memorable.

From the very beginning, this year’s team proved they weren’t to be brushed aside.

Prior to the start of the season, Rowland recalls that the Florida Gators were ranked in the No.5 spot. Her girls quickly took control of that when they won four meets straight. By the third week of the season, two Gators had been giving SEC weekly honors. Sophomore Alicia Boren was named “Gymnast of the Week”, alongside junior Alex McMurtry who was named “Specialist of the Week”.

Florida won back-to-back SEC weekly honors as a result of the fourth week. This time it was junior Kennedy Baker who was named “Specialist of the Week” and Amelia Hundley who won “Freshman of the Week”. The Gators would go on to be mentioned in the weekly honors for two more weeks. In both of those weeks, more than one Gator was mentioned to a spot. At the end of the eighth week of the season, Florida players dominated all three honor spots.

Rowland notes that it’s this very same determination that she observed in the championship.

The Gators didn’t lose their first meet until the first Friday in February, where they fell to rival Alabama by .400 points in Tuscaloosa. Florida would go on to lose only two more games in the regular season: the second to LSU in their ninth meet of the season and the third to West Virginia in their final meet of the regular season.

Florida’s loss to West Virginia marked their first home loss since the 2016 season, when they fell to LSU.

In the four times the Gators were named to the SEC Weekly Honors, five different Gators attained spots.

While Rowland has words to say about all of her girls, it was with Alex McMurtry that she seemed speechless and just couldn’t find words to convey her journey.

McMurtry’s performance this season brought her a number of accolades. In March, she became the first Gator to be named the Southeastern Conference Gymnast and Scholar-Athlete in the same season. A few weeks later in April, she was named the 2017 NCAA Elite 90 Award recipient for gymnastics. With the award only being established in 2010, McMurtry was the first Gator athlete ever to win the award for her GPA.

The junior has recently been named as a finalist for the Honda award.

Of course, it takes a team to compete. Rowland recognizes this, as does her team, who she says have a type of relationship with one another that gives them a special sense of camaraderie.

This offseason, the Gators are only expected to lose one player: senior Claire Boyce.

With the other 12 girls expected to say, Rowland can continue to help the girls hone their talent and continue to grow closer.

Until then, Jenny Rowland plans on using the offseason to make her team a more seasoned one.