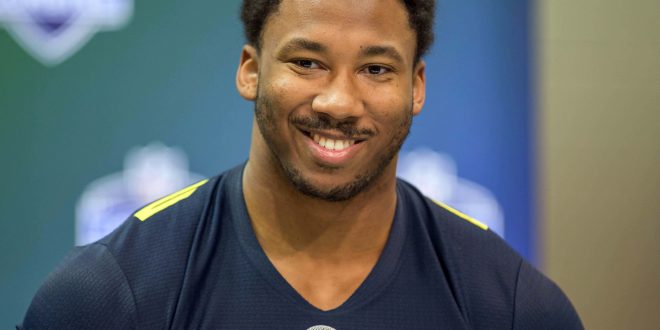 Myles Garrett Confident He Deserves to be First Overall Pick

For weeks on end, NFL mock drafts have had the same name at the top: Myles Garrett, DE (Texas A&M).

The 6-foot-4, 272-pound rusher is a rare combination of power, explosiveness and speed. He’s considered a generational talent whose pass-rush production and athleticism have him on a path to an all-pro career.

With The First Pick…

As the first day of the draft, April 27, nears, so too does the question of what the Cleveland Browns will do with their first overall pick. The Browns have a number of holes in their team, including QB. It’s led some to believe they might draft need over best overall talent and go after North Carolina signal caller Mitchell Trubisky.

But Garrett, always willing to bet on himself, says the team needs someone like him. And of course, he’d love to be first overall because of the money that comes attached to the pick. Last year’s No.1 pick, Jared Goff of the Rams, signed a $27,487,673 deal. No.2 overall pick Carson Wentz signed for slightly less, $26,676,338, a difference of just over $800K.

But Garrett has been vocal, sometimes in jest, sometimes seriously, about having the Dallas Cowboys trade up from the 28th pick to take him. Garrett is from Arlington, TX and of course, was a star at Texas A&M. In early February he openly expressed his desire to play for the Cowboys, but it’d take quite a bit for the team to make the jump to the top. Garrett has since painted his comments in a humorous light, downplaying the seriousness of them.

Garrett has drawn comparisons to a few current NFL players. Broncos LB and fellow Aggie alum Von Miller is one of them. Garrett says Miller has the edge in skill but that he possesses more size and speed. Others point to 16-year veteran Julius Peppers as a comparison. Any team that ends up with Garrett would happily take a Peppers-like career. That would mean nine pro-bowls and 143.5 sacks in 234 games.

Regardless of which team drafts him or who’s the most likely outcome, Garrett is confident he’s more than worthy of the top overall pick. The last DE to go first overall was Jadaveon Clowney in 2014. Injuries have limited him early in his career, but he’s finally made good on his status by making the Pro Bowl last season for the first time. Before Clowney, Mario Williams was the last DE in 2005. He made three Pro Bowls.