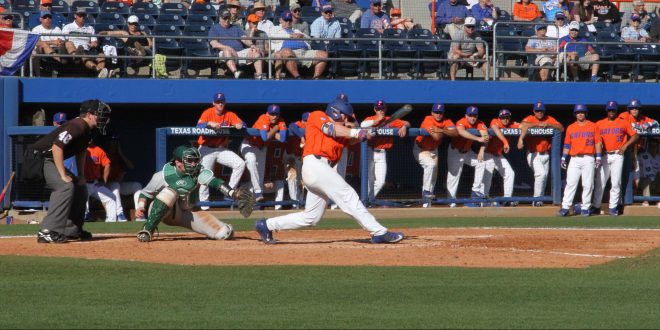 The 10th ranked Gator baseball team is in Gainesville for a three-game series against SEC East rival and 18th ranked South Carolina from Thursday through Saturday.

We're ready for a HUGE weekend series against South Carolina! See you at the Mac, it gets started tomorrow night at 7:30! #GoGators pic.twitter.com/hfXW1yfR1i

The Gators enter the series with a 25-12 overall record, and an 8-7 record in conference play. Florida has won nine out of their past 12 games, including coming off of a mid-week 2-1 over North Florida at McKethan Stadium, where they are 17-5 on the season.

In that win, right handed reliever Frank Rubio played a crucial role, tossing 4.0 scoreless innings in his biggest outing since the beginning of the year. Dalton Guthrie drove in the game winning run in the fifth inning to highlight a 2-for-3 performance at the plate.

The performance at the plate has coincided with the return of Austin Langworthy from injury. The freshman is batting .385 at the plate in conference play since returning to the lineup, including three runs and five RBIs in 13 SEC plate appearances. The return of Langworthy also gives the Gators a solid pop in the middle of the lineup from the left side, as left handed batters are always at a premium in conference play. For his efforts, Langworthy earned SEC Freshman of the Week honors this week.

The 18th ranked Gamecocks come into Gainesville with a 23-13 record overall and an 8-7 record in SEC action just like Florida. Unlike Florida though, South Carolina is just 3-5 in their past eight games which includes a series loss to Mississippi State and a 20-5 beatdown by North Carolina last week. They are, however, coming off a mid-week 3-2 win over Davidson.

The #Gamecocks are tied for 2nd in the East, 6th overall at the halfway point. #ForeverToThee Only 1 school has played more top 25 teams https://t.co/JWrwOlScIo

The Gamecocks will look to take the series in Gainesville on the backs of their pitching rotation. South Carolina boasts one of the best pitching staffs in the SEC, as they rank first in the SEC in ERA in conference games (2.77) and second in strikeouts and opponent batting average.

That effort is led by Friday night starter Clarke Schmidt. Schmidt is one of 40 players named to USA Baseball’s Golden Spikes Award Midseason Watch List, an award for the top amateur baseball player in the country. And he was named for good reason. Schmidt is 4-1 on the season with a 1.31 ERA. He ranks third in the conference in that category, as well as fourth for strikeouts. Thursday night’s battle against Alex Faedo could shape up as a pitcher’s duel to set the tone for the rest of the series.

At the plate, sophomore infielder LT Tolbert leads the charge for the Gamecocks. He leads the team in batting with a .325 average and has scored 16 runs on the season as well as driving in 27 runs. As of late, it’s been freshman outfielder Carlos Cortes with the hot bat. He hit .333 with three home runs and five RBIs in the weekend series against Mississippi State.

Florida went 1-1 last year against South Carolina, with the third game of last year’s series being cancelled due to rain.